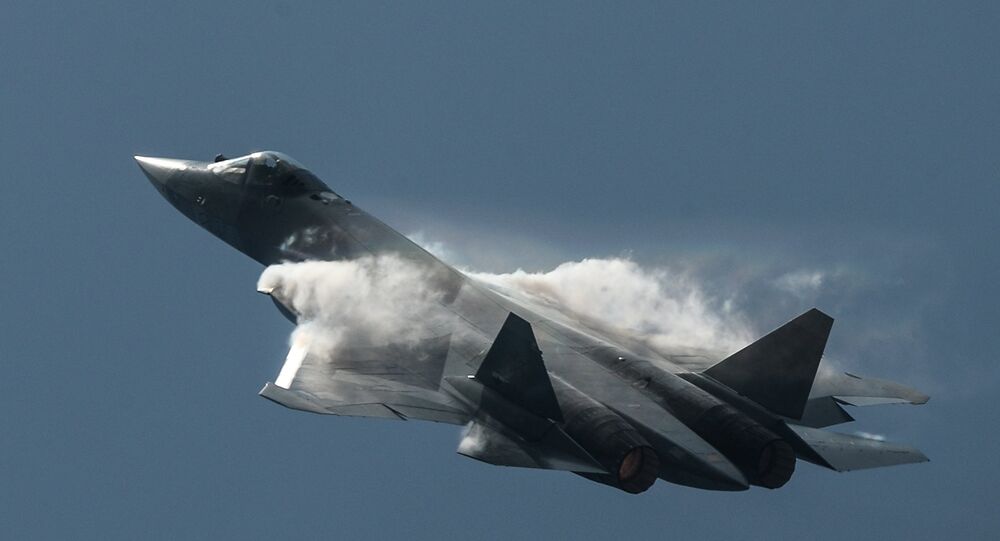 5 of Russia's Hottest Next Generation Weapons

US magazine 'National Interest' took a look at five of the most promising military advances being made by Russia's defense industry.

© Sputnik / Alexey Filippov
Russia, India Finalizing Deal on PAK FA Fifth-Generation Jets
US international affairs magazine 'National Interest' has listed five of Russia's most interesting defense projects, which it believes are "certainly systems NATO should have its collective eyes on in the months and years to come."

First on the list is the well-renowned Sukhoi T-50 PAK-FA fifth generation stealth fighter, set to enter service with the Russian Air Force in 2017. The aircraft is a "rough analogue to the U.S. Air Force’s Lockheed Martin F-22 Raptor," writes Dave Majumdar.

© Sputnik
PAK FA (Advanced Tactical Air Sistem) T-50
A stealth bomber also caught Majumdar's eye; the PAK-DA, which is currently in development and due to enter service in 2025, when it will replace the Tu-95 and Tu-160 bombers. Aircraft manufacturer Tupolov began work on the construction of PAK-DA last year, and the first testing of the aircraft is slated for 2019.
© Photo : Youtube/Militer Dunia
Artist concept of a T-4MS "Project 200" perspective aircraft and deep modification of the soviet Sukhoi T-4 high-speed reconnaissance, anti-ship and strategic bomber.
© Sputnik / Vladimir Pesnya
The Tupolev Tu-160 Blackjack strategic bombers
At the 2013 Moscow Air Show General Lieutenant of the Russian Air Force Victor Bondarev confirmed that the long range bomber will be able to carry out the tasks of three different bombers.

"All the tasks that the Tu-160, Tu-95MC and Tu-22 carry out, the PAK-DA will be able to fully complete, using its hypersonic weapons."

Host photo agency
An infantry fighting vehicle with the Armata Universal Combat Platform at the final rehearsal of the military parade to mark the 70th anniversary of Victory in the 1941-1945 Great Patriotic War.
The National Interest also remarks on the Armata project, which is developing a universal combat platform that can be adapted to form the basis of a range of military vehicles, such as a chassis for self-propelled guns, an armored infantry fighting vehicle, and tanks like the T-14 third generation main battle tank, which was on show at the 2015 Victory Day parade in Moscow.
© Sputnik / Maksim Bogodvid
An employee at the workshop at the Kazan Optical-Mechanical Plant, where the 1L2262E Rtut BM electronic warfare are assembled
In addition, the magazine takes note of Russia's electronic warfare systems, such as the "Krasukha-4 vehicle-borne jamming system and the very capable Khibiny airborne jamming pod."
© Sputnik / Alexey Kudenko
The Chelyabinsk Oscar-class nuclear-powered submarine
"Russian electronic warfare systems are equal to if not more advanced than their NATO and American counterparts," writes Majumdar, whose attention was also drawn by the development of two new next-generation nuclear submarines, to replace the Oscar-class SSGN and Sierra-class submarines.
...
Reddit
Google+
Blogger
Pinterest
StumbleUpon
Telegram
WhatsApp
585