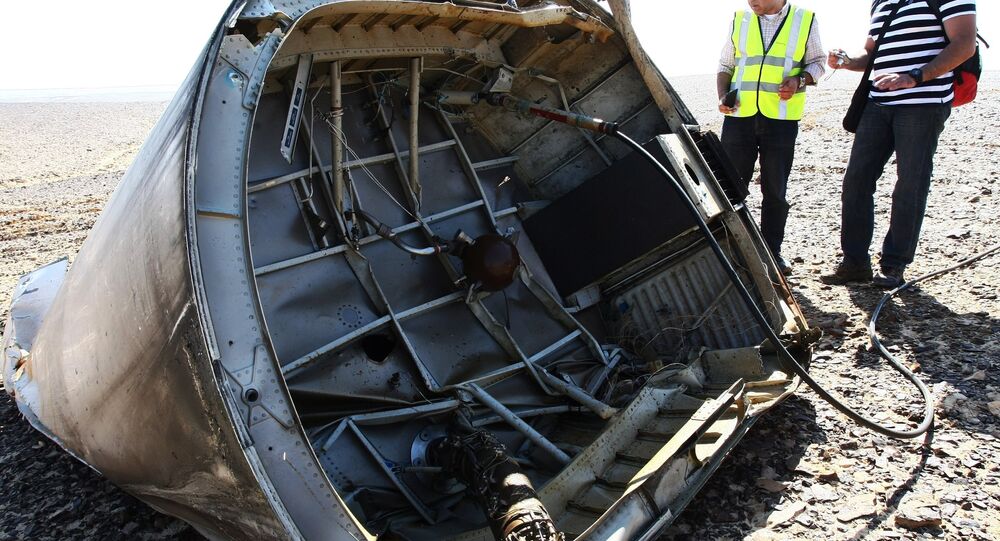 Egyptian President Deems ISIL Claims of Taking Down A321 ‘Propaganda’

MOSCOW, November 3 (Sputnik) — A cell of the terrorist group IS in the Sinai Peninsula has taken responsibility for bringing down a plane flying from the Egyptian resort city of Sharm El-Sheikh to St. Petersburg on Saturday. All 224 people on board have been confirmed dead in what has become the greatest civil aviation disaster in Russian and Soviet history.

"When there is propaganda that it crashed because of Isis (ISIL), this is one way to damage the stability and security of Egypt and the image of Egypt. Believe me, the situation in Sinai — especially in this limited area — is under our full control," Sisi told the BBC.

He added that all those interested in the matter were welcome to participate in the investigation into the causes of the tragedy, warning against premature conclusions.

© Sputnik / Maxim Grigoryev
On Board Explosion Might Be Cause of Russian A321 Crash - Stratfor
According to Egyptian government spokesman Hossam Kawish, preparation of a report based on flight data recorders recovered from the crashed Russian Kogalymavia A321 will take from one to four weeks.

Egypt has been battling against Islamist militants, especially in the Sinai Peninsula, since the ousting of President Mohammed Morsi in 2013. Radicals affiliated with the Islamic State militant group have claimed responsibility for a string of attacks on security and police officers across Egypt.

US Offers to Help in Russian A321 Plane Crash Investigation

Egypt Open for Cooperation with Russia in A321 Crash Probe