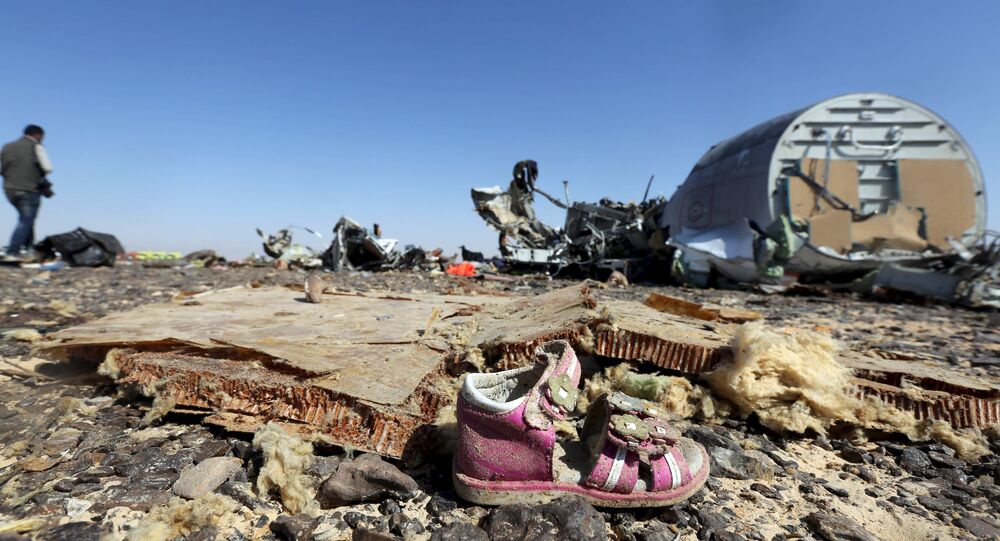 Mark Rosenker, a former US National Transportation Safety Board (NTSB) said that the cause of the Russian Airbus A321 plane crash could be a catastrophic decompression.

© REUTERS / Mohamed Abd El Ghany
Debris Shows Kogalymavia A321 Disintegrated at High Altitude
MOSCOW (Sputnik), Anastasia Levchenko – The Russian Airbus A321 plane could have been destroyed from loss of cabin pressure or structural damages, a former US National Transportation Safety Board (NTSB) told Sputnik on Sunday.

Kogalymavia flight 9268 crashed in Egypt’s northern Sinai Peninsula early Saturday shortly after takeoff from the Sharm El-Sheikh resort en route to St. Petersburg. All 217 passengers and seven crew members on board were confirmed dead in what has become Russia’s greatest civil aviation catastrophe in history.

The head of the Russian Federal Air Transport Agency (Rosaviatsia) Alexander Neradko said earlier the scattering pattern of debris indicated that the aircraft disintegrated at a high altitude. Executive Director of the Interstate Aviation Committee (IAC) Viktor Sorochenko also said that the plane broke into pieces midair, but added that it was too early to draw any conclusions.

"It could have been a catastrophic decompression. It could have structural failures… This airplane a number of years ago had a tail strike," Mark Rosenker said when asked to assess whether an external impact is the only scenario of the plane breaking midair.

© REUTERS / Peter Kovalev
Condolences from Around the World on Russia's Day of Mourning
Egyptian aviation authorities said the Airbus A321 made a sharp descent of 5,000 feet before disappearing from radar screens.

Rosenker said the process of downloading and analyzing cockpit voice and flight data recorders would provide greater detail into the causes of the plane crash. Two black boxes have been recovered from the crash site.

Officials say lack of definitive information prevents them from ruling on the causes of the crash.

An inter-departmental team headed by Russian Emergencies Minister Vladimir Puchkov is investigating the crash site. French, German and Irish aviation authorities accompanied by Airbus experts have sent teams to assist in the probe.