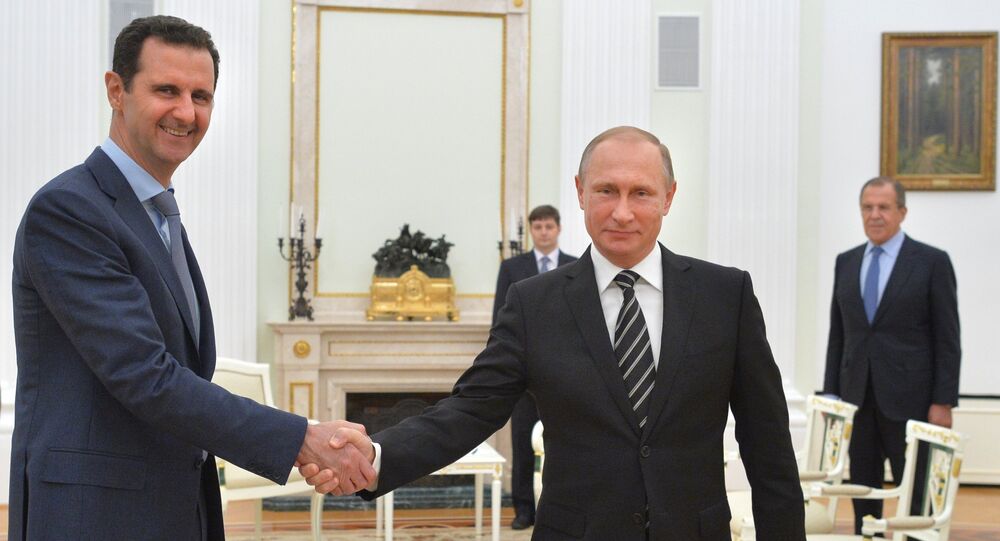 Russia launched its aerial operation against terrorist group targets in Syria on September 30. Since then, the Syrian military has launched a series of offensives against the groups across the country. At the talks, Assad said that any military action also presumes further political measures to resolve the Syrian crisis.

"We are ready to do what we can, not only [with respect to] military action to fight terrorism in Syria, but also via the political process," Putin said in a transcript published on the Kremlin website.

Assad thanked the Russian leadership for its aid to Syria, saying that it stands for Syria's unity and independence.

"The terrorism which now spreads through the region would have taken much greater areas and spread to an even greater territory if it was not for your actions and your decisions," Assad said.

© Photo : Ministry of Defence of the Russian Federation
Russian Bombers Destroy Major Terrorist Base With Command Post in Syria's Idlib (VIDEO)
Putin also thanked Syria's people for their contribution to the fight against terror. He noted that Russia is worried because at least 4,000 fighters from the former Soviet Union are fighting alongside terrorist groups in Syria.

Assad also said that terrorism has become an obstacle to the Syrian crisis' political solution. He added that the entire Syrian people seek to decide the country's fate, and not only the country's leadership.

The talks were held in both a limited and an expanded format, also touching on topics including bilateral relations and prospective plans for economic reconstruction.

"Naturally, the questions [were about] the fight against terrorist extremist groups, questions regarding the continuation of the supporting offensives of the Syrian armed forces," Peskov said.

According to Putin’s spokesman, members of Russia’s upper leadership took part in the expanded format of the talks and "the talks were quite long and the topic of negotiations was completely clear."