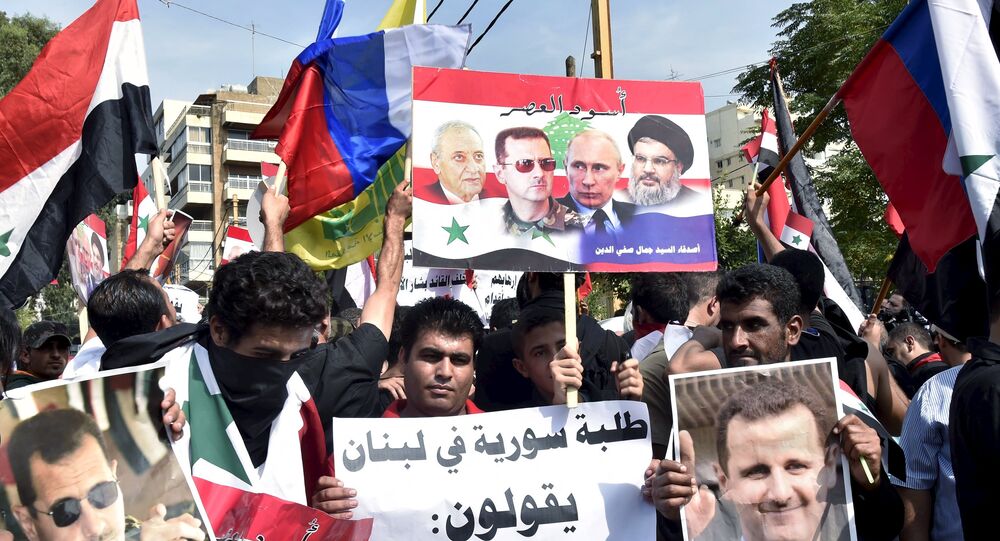 Rallies supporting Russia's operation in Syria have been held Sunday in European and Middle Eastern states, including Berlin, Lebanon, Hungary and Serbia.

Members of Germany’s Syrian community gathered outside the Russian embassy in Berlin on Sunday to express their gratitude to the Russian people for Moscow's support in the Syrian war against terrorism.

“We gathered here today in front of the Russian embassy because Russia is part of a coalition, which is fighting for peace in Syria, against war and terrorism everywhere in the world… We want to thank all Russians and President Vladimir Putin for their participation in the fight against terrorism and fascism in the Middle East,” Radi Skandav, one of the participants of Sunday’s rally, told RIA Novosti.

Russia’s Sukhoi Su-25, Su-24M and Su-34 attack aircraft, with the support of Su-30 jets, have been conducting precision airstrikes against ISIL targets in Syria since September 30, following a request from Syrian President Bashar al-Assad.

“All these terrorists are fighting under the same banners and pronouncing the same slogans. To us, Syrians, all these people who took up arms against the Syrian people and the Syrian state and army are not an opposition. They are all members of groups financed by Saudi Arabia and Qatar and sent to Syria to destroy our country, education, medicine, our very life.”

“The Syrians want none of this… We want to have a modern democratic state where we will enjoy equal rights and live in peace, enjoy genuine freedom and democracy. We do not want any Islamization of Syria,” Radi Skandav emphasized.

"We gathered to express support for the Russian government in the fight against terrorism. We can not be satisfied with the policy of the United States and the European Union in the Middle East because they are acting only in their own interests, maybe for access to oil and gas, they are destroying the region," Syrian student Lamak Cooder told a RIA Novosti correspondent in Belgrade.

Meanwhile in Beirut, participants of a rally supporting Russia's military operation in Syria handed over a letter expressing gratitude to the Russian Embassy.