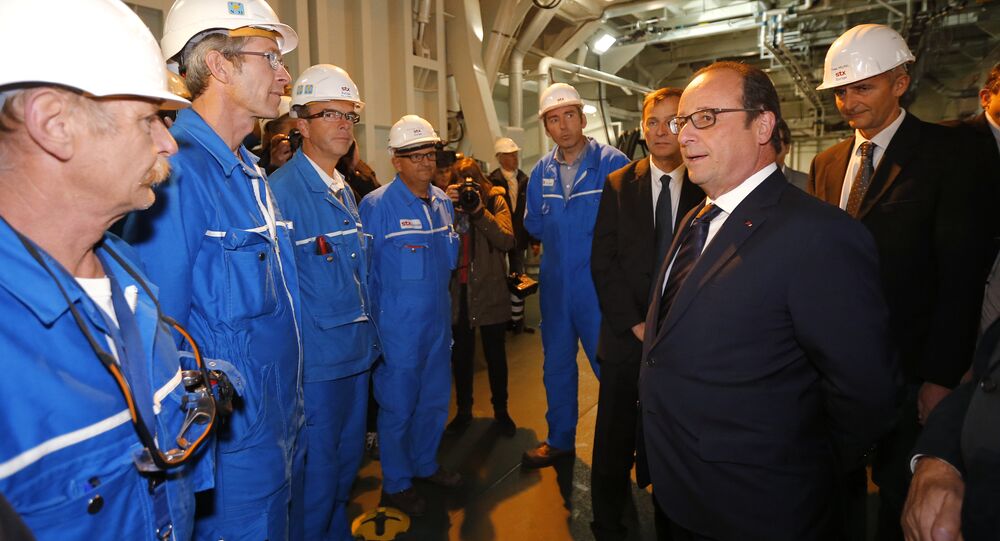 © Sputnik / Grigoriy Sisoev
French-Built Mistral Warships to Arrive in Egypt in Summer 2016
France is looking to sell new ships to Russia in the future, French President Francois Hollande said on Tuesday during his visit to the shipyard of Saint-Nazaire in western France.

"Things went well with Russia, which has agreed to cancel the contract. And I even think we'll get partnerships for new ships," Hollande said.

He didn't specify whether they would be military ships. Neither did he say if Russia is willing to buy anything from France in the future.

The French president came aboard one of the warships, originally named the Vladivostok, in reference to the Russian port. The inscription on the hull has been erased and replaced by grey paint.

The Mistral sale was supposed to be the biggest arms sale ever by a NATO country to Russia, until the deal fell apart because of the Ukraine crisis.

Egypt emerged as France’s replacement customer for the Mistrals in September 2015.

"I had to sell them to a country that needed to ensure its own security but didn't threaten anyone," Hollande said.

The ships are supposed to arrive in Egypt in summer 2016 but first they should be de-equipped of Russian-developed command, control and communication systems.

Russia, France to Sign Agreement on De-Equipping Mistrals in November