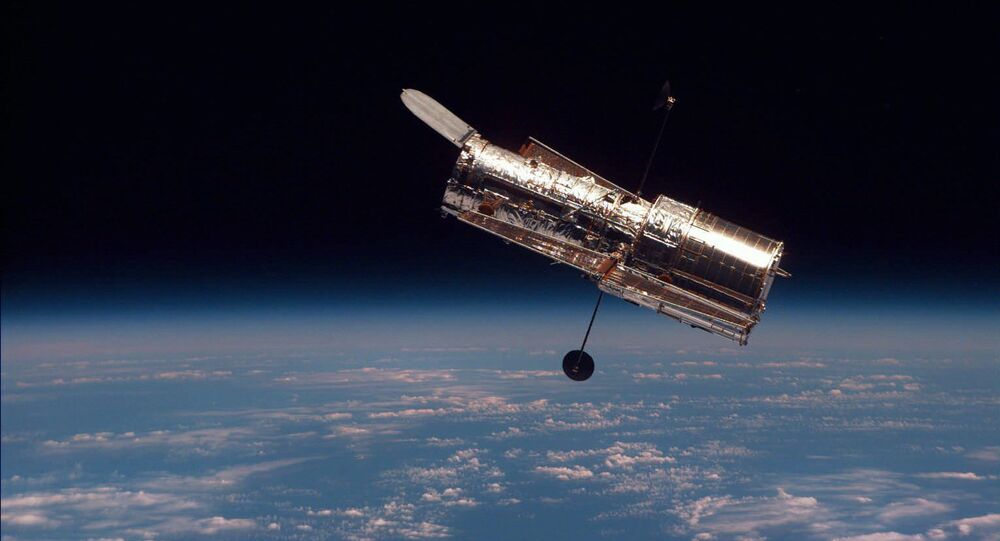 © AP Photo / Maxim Marmur
Space Transport Law Keeps US Dependent on Russian Space Engines
A team of astronomers led by Anthony Boccaletti has been searching the gas-and-dust disc of a young star AU Microscopii for any signs of clumpy or warped features, as such signs might give away the location of possible planets. AU Mic is located in the Microscope constellation, 32 light years away from Earth. It is a small dim star, classified as a red dwarf and a flaring temporary star.

Having analyzed the images, the scientists discovered five unknown wave-like formations, resembling ripples in water, within the planet-forming disc of the AU Mic. These structures present another astronomic mystery to be solved, because nothing similar was ever seen before. The scientists haven't yet determined the nature of these "waves".

"Everything about this find was pretty surprising!" said co-author Carol Grady of Eureka Scientific, USA. "And because nothing like this has been observed or predicted in theory we can only hypothesise when it comes to what we are seeing and how it came about."

Having studied older photographs made with the NASA/ESA Hubble Space Telescope in 2010 and 2011, the researchers came to the conclusion that the unusual structures move with extreme speed — up to 40,000 km per hour. The features further away from the star appear to be moving faster than those closer to it, and at least three of them are moving so fast that they could well be escaping from the gravitational attraction of the star.

© Photo : Youtube/ European Space Agency, ESA
Ad Astra: Launch of Russia’s Soyuz Spacecraft From Baikonur
Currently the research team is looking into possible origins of this phenomenon. One of them suggests that the waves could result from a major flare that stripped large amounts of material from the closest planet.

The team will continue observing the AU Mic system with SPHERE and other facilities to try to understand what is happening.