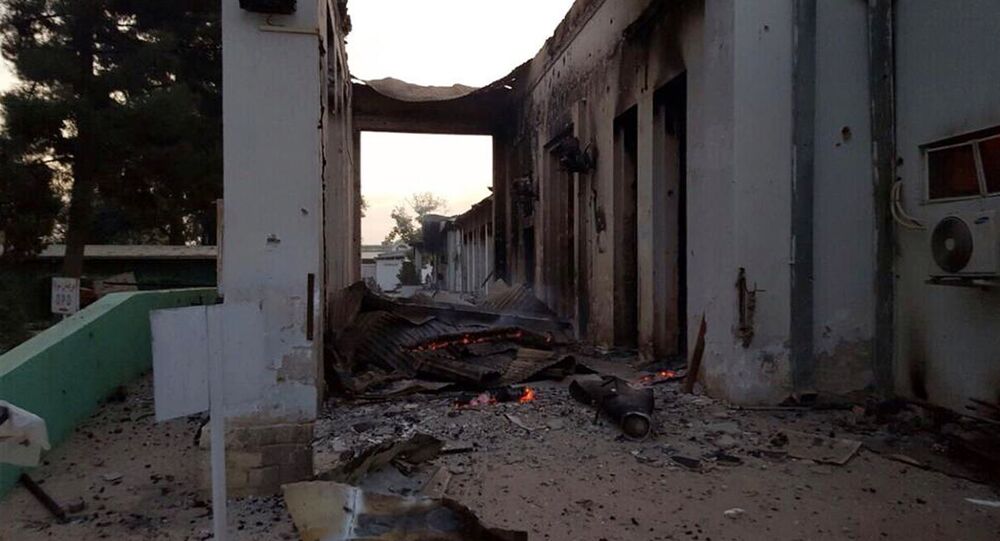 Former Pakistani Ambassador to the UN and President of the Institute of Regional Studies Arif Ayub told to Sputnik that the perpetrators of the deadly airstrike on the MSF hospital in Kunduz will not face justice, since the US considers itself above international law.

There is no chance that a probe into airstrikes against the MSF hospital in Kunduz will be carried out by the International Humanitarian Fact-Finding Commission, since the US considers itself above international law, Arif Ayub, a former member of Pakistan's Mission at the United Nations in New York, told Radio Sputnik on Wednesday.

"There is no way that this can be resolved under international law, because the US thinks it is above international law," explained Arub, who expects the US to block any attempt by the Commission to carry out an investigation.

On Wednesday Medecins Sans Frontieres called for an investigation by the International Humanitarian Fact-Finding Commission into the Kunduz airstrikes, and called the bombings an intolerable attack on the Geneva Conventions.

"It will be forgotten, until there is another," said Arub, who is also President of the Institute of Regional Studies in Islamabad, and served as his country's Ambassador to Italy, Afghanistan, Egypt and the Netherlands.

"That's what has happened since the Vietnam War, or even worse since the Korean War. These atrocities keep happening, and no-one does anything about it."

"They couldn't care less, it happened with us in Salala a couple of years ago, in which they bombed one of our military posts, and it was going on for nearly two or three hours. We were calling them every five minutes and telling them, you're hitting the wrong target, and they couldn't care less."

"That's their attitude, their imperial hubris, they couldn't care about killing any non-American at all."

© REUTERS / Denis Balibouse
US Bombing of Kunduz Hospital a War Crime, Not a Mistake - MSF
Looking towards a resolution of the conflict in Afghanistan, Ayub recommended the US leave the country, describing a "vicious cycle" of US bombing and Afghan revenge attacks, that will continue for as long as US troops remain in the country.

"There was talk of a new Marshall Plan, that Afghanistan would end up like Germany and Japan after the Second World War. But they don't have the capability to do anything like this any longer."

"It's better for the regional countries to work this out amongst themselves, than involving a superpower which is not committed to them."

© REUTERS / U.S. Air Force/Senior Airman Matthew Bruch/Handout
Regime Change as American as Apple Pie
The US's commitment to democracy, which successive US governments have claimed as their motivation for regime change in the Middle East and Asia, leads to a fundamental weakness in its foreign policy, said Ayub, since objectives are decided on a short-term basis, when playing out election campaigns to a domestic US audience.

"It's not a question of every four years. Every year when the budget is passed the Senate and the Congress create a fuss over something or other, especially when there are different parties in control of the Congress and Senate, and of the Presidency, that leads to even more problems."

"That's why there have been colonial failures since 1945."

"It's an extremely short-term view, and in the case of Pakistan, it's determined even on a monthly basis. One month they're our best friends and best allies, and the next month cut off from all assistance."

"It's more like a stock exchange than a government."

US Bombing of Hospital in Afghanistan Deliberate – Anti-War NGO

US Must Answer for Killing Civilians in Afghanistan - Veterans For Peace