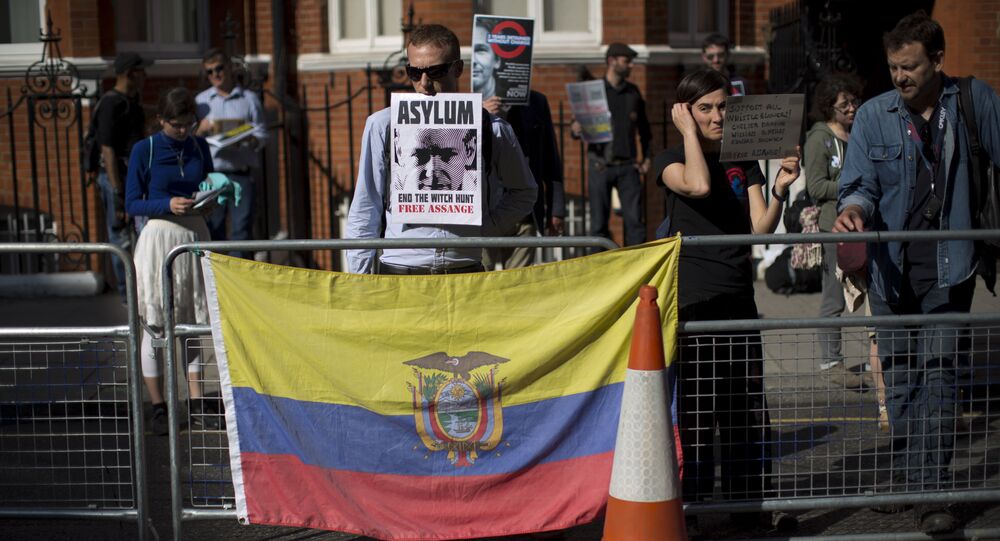 WikiLeaks founder Julian Assange has slammed Australia for being under the control of Washington, in relation to the country's surveillance program and links to the NSA.

© AP Photo / Evgeny Kraws
US Will Do Everything to Overthrow ‘Unwanted’ Governments - Assange
Speaking during a video link with the Melbourne-based Wheeler Center, Assange minced no words when dwelling on the US NSA's surveillance program.

His remarks, which coincided with Assange’s 1199th day inside the Ecuadorian Embassy in London, came after the release of Assange's new book titled The WikiLeaks Files: The World According to US Empire.

"The capital of Australia is [in fact] Washington DC," Assange said, in a clear reference to surveillance cooperation between the two countries.

He also claimed that in this regard, it is already irrelevant to speak of Australia's sovereignty.

"All sorts of strange things happen in politics, but I think Australia is a lost cause as a sovereign state," Assange said.

He added that "halting increasing surveillance in Australia is [also] a lost cause."

Additionally, he said that "Australia is notorious for abandoning its citizens, not just me."

© AP Photo / Kirsty Wigglesworth
Playing Dress-Up: Docs Reveal Plans to Smuggle Assange Out of Embassy
Assange went even further by arguing that as far as surveillance tactics are concerned, one might as well consider the US, the UK, Canada, New Zealand and Australia as one country.

Ecuador granted Assange asylum on August 16, 2012, helping him to avoid prosecution in the United States, where he could face multiple espionage charges for leaking classified US documents, if extradited.

Sweden to Open Assange Talks With Ecuador Next Week