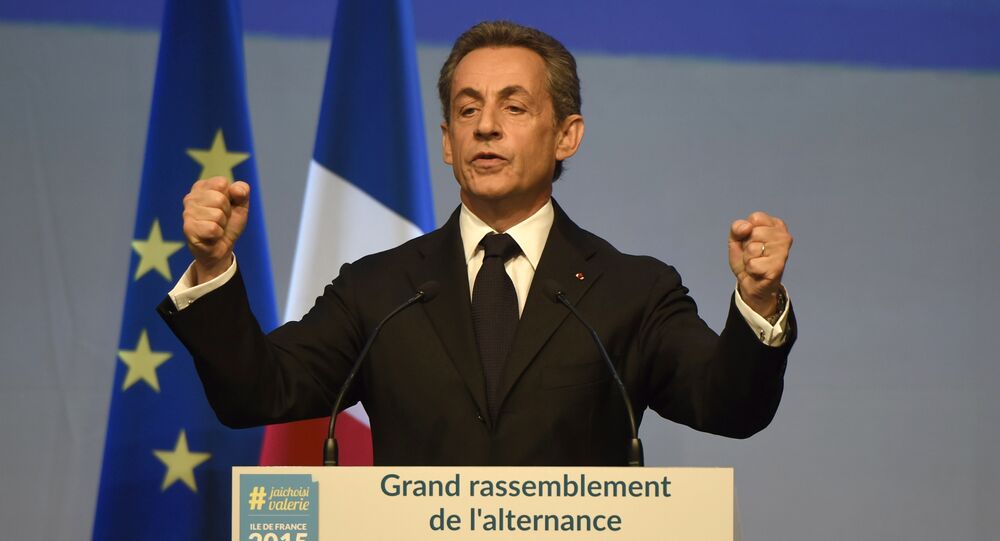 © AP Photo / Christophe Ena
L'hypocrite: France Backed Spying on Other Countries Since Sarkozy's Time
Nicolas Sarkozy and Donald Trump are doing their best to copy the image of Russian President Vladimir Putin in a bid to attract more voters ahead of the upcoming presidential elections in their countries, but to no avail, the French news network AgoraVox reported.

The French Republican center-right political party and the US Republican Party are currently in the midst of their pre-election campaigns in the run-up to presidential elections due in France and the US in 2016 and 2017, respectively.

In connection with this, AgoraVox decided to look at two of the leading figures from each party, namely, Nicolas Sarkozy and Donald Trump. Both leaders have adopted the same approach to winning votes, using the so-called 'Putin style', which involves taking a clear and courageous position, giving transparent and simple answers in the face of complex and dangerous current events.

It is an open secret that Putin's popularity ratings are on the rise both in France and the US, where the Russian President took tenth place in the list of the country's most popular people, AgoraVox reported, citing Sarkozy's and Trump's understandable efforts to copy Putin's political image.

Obviously, it is irrelevant to draw parallels between Trump and Sarkozy, AgoraVox said, describing Trump as a tycoon who decided to enter politics at his own expense and who is known for his simplicity of character mixed with undisguised xenophobia and Reagan-style nationalism. As for Sarkozy, he is a professional hardline politician with a tarnished reputation but who cannot be called a simpleton, AgoraVox said, adding that apart from the 'France-has-always-been-on-the-side-of-the-dictators lapse,' Sarkozy's comments are rather mirthless.

As for Putin, he is considered a brave politician who does not back down in the face of challenges, and who is able to breathe life into the Russian soul, buried under the rubble of the Soviet system, according to AgoraVox.

At first glance, AgoraVox went on to say, Trump can be compared to Putin, who emerged as a leader in a time when Russia was devastated, and began propelling it to its former greatness. Needless to say, Trump has never achieved anything like this.

© REUTERS / Mike Stone
Trump: US Should Let Russia Fight ISIL
A politician will never be able to stay afloat in American politics for long with the help of demagogy alone, according to AgoraVox. In addition, the US economy is relatively healthy, and the country remains the world's dominant military power, despite Trump's assurances to the contrary.

On the whole, the American billionaire can better be compared to the comedian Pat Paulsen, who has run for the US presidency on more than one occasion.As for Trump, his behavior looks like that of a buffoon, which is not the case with Putin, who is more like a cold-blooded security agent rather than a comedian, AgoraVox said.

And of course it would be ridiculous to draw any parallels between Putin and Sarkozy, something that is tantamount to comparing a poodle with a polar bear, according to AgoraVox. As a buffoon, Trump tries to expose political hypocrisy, while Sarkozy can be seen as the embodiment of political hypocrisy as such. It is safe to say, therefore, that Trump will pose a danger to Sarkozy if there are too many parallels between their pre-election campaigns, AgoraVox concluded.