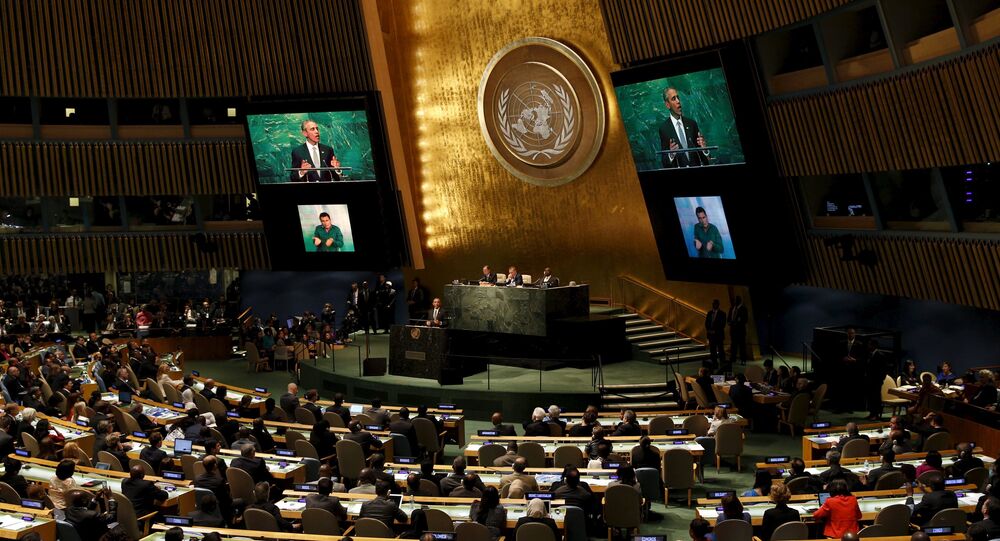 Western countries continue to dominate in the UN, which should be reformed as soon as possible, according to Hans Christof von Sponeck, the UN's former Assistant Secretary-General and Humanitarian Coordinator for Iraq.

© Sputnik / Andrey Stenin
UN Should Play Active Role in Fight Against ISIL – Morocco Foreign Ministry
Hans Christof von Sponeck, former UN Assistant Secretary-General and UN Humanitarian Coordinator for Iraq, has called for urgent reforms in the United Nations, which he said is still dominated by Western countries, including the US and the UK.

In an interview with RT, he recalled that "the UN is not a Western institution, but an international organization which provides a multilateral format."

"The UN tries, amid very difficult conditions, to fulfill the provisions of its charter, which does not imply benefit for some and hardship for others; the charter envisages an integral approach to solving international problems," Sponeck said.

According to him, a "very Western" approach is still in place the UN Security Council, which is in great need of anti-Westernization measures.

He said that one should not tolerate the dominance of the two Western powers, namely, the United States and the United Kingdom, in the UN.

"If we continue to follow this path, we should not be surprised when the Security Council is lethargic," Sponeck said.

He added that the UN's pro-Western course had previously led to a number of major military operations which resulted in a huge number of victims.

© AP Photo
UN General Assembly: The Speeches That Made History
Among other things, the UN is responsible for maintaining international peace and security. But some of the largest military operations have been conducted without UN approval in the past decade.

In 1999, NATO forces began bombing Yugoslavia, in a move that was not authorized by the Security Council, which also did not give the green light to the US-led invasion of Iraq in 2003.

In 2011, the Security Council approved the establishment of no-fly zones over Libya, in a resolution that failed to prevent NATO from launching air strikes on this North African country.

Also, the Saudi-led coalition currently carries out air raids on Yemen without getting a mandate from the UN.