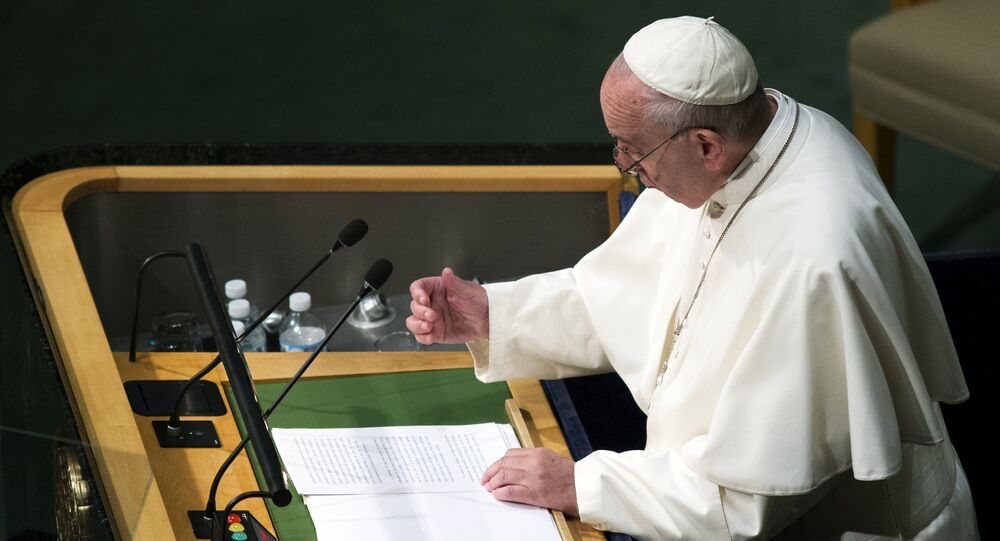 Pope Francis condemns destruction of religious shrines and executions of religious and ethnic minorities carried out by the militants of ISIL.

© REUTERS / Andrew Kelly
Pope Calls for Complete Destruction of Nuclear Weapons
WASHINGTON (Sputnik) — Pope Francis condemned persecution of religious and ethnic minorities and destruction of cultural sites in Middle East and North Africa in a speech at the UN General Assembly on Friday.

“I must renew my repeated appeals regarding the painful situation of the entire Middle East, North Africa and other African countries, where Christians, together with other cultural and ethnic groups, and even members of the majority religion…have been forced to witness the destruction of places of worship, the cultural and religious heritage,” the pontiff said.

The Islamic State terrorists have been carrying out attacks on religious shrines and executed minorities in Iraq and Syria, where the extremist Sunni militant group has seized a significant amount of territory and declared a caliphate.

ISIL militants have also captured a number of historic cities, including the ancient city of Palmyra, destroying some of its cultural sites.

The Pope & the Dopes - Francis Goes to Congress

WATCH: CNN Broadcasts Woman’s Plot to Throw Her Shoe at the Pope’s Head