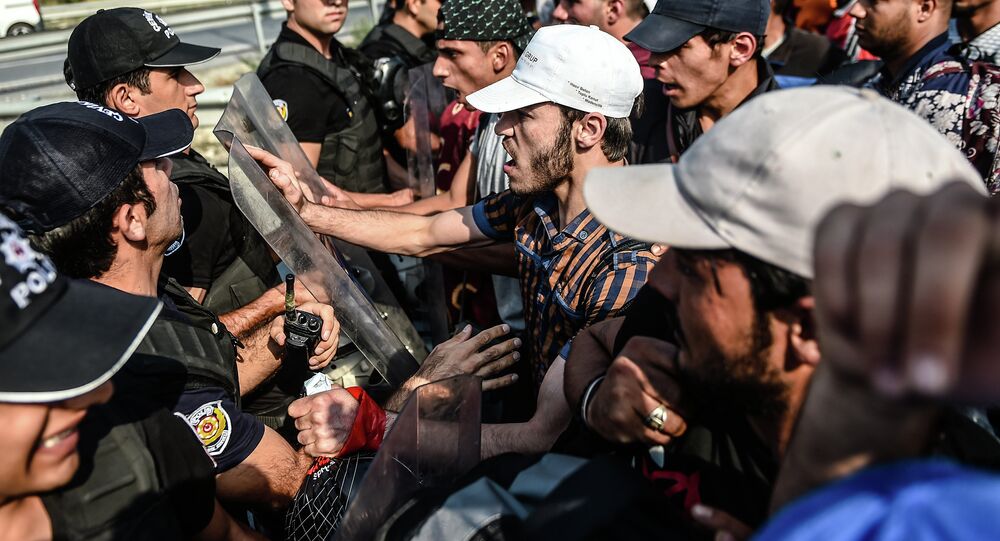 Turkey to Force Syrian Refugees From Border With Greece on Tuesday

Dursun Ali Sahin, Turkish province's governor, said that local authorities had been providing migrants with food, blankets and other essentials.

ANKARA (Sputnik) — Turkish authorities will remove Syrian refugees gathered in the Turkish province of Edirne near the border with Greece on Tuesday, the province's governor, Dursun Ali Sahin, said Monday.

Thousands of refugees arrived in the Edirne Province, which borders Greece and as such the Schengen zone, but they were not allowed to cross into the EU state. On Thursday, Sahin promised to remove the refugees from the region before Saturday. However, the sheer number of the refugees meant many of them managed to stay in the province.

© AFP 2021 / NIKOLAY DOYCHINOV
Migrants Routinely Abused, Beaten in Macedonia
"If the Greek side does not request or allow the people to enter, we cannot let them cross the border. We decided to compulsorily remove them [refugees] from Edirne on Tuesday. They will be sent either to refugee camps or to any other Turkish province, of their choosing,” Sahin said in an interview with the Turkish NTV television channel.

He added that local authorities had been providing migrants with food, blankets and other essentials.

Turkey is a major gateway for refugees wishing to reach safety in Europe. Amid what has been called the worst refugee crisis since World War II, Ankara has declared an open-door policy for refugees and has spent about $7.6 billion to date on hosting 2.2 million Syrian refugees, according to Turkish Deputy Prime Minister Numan Kurtulmus.