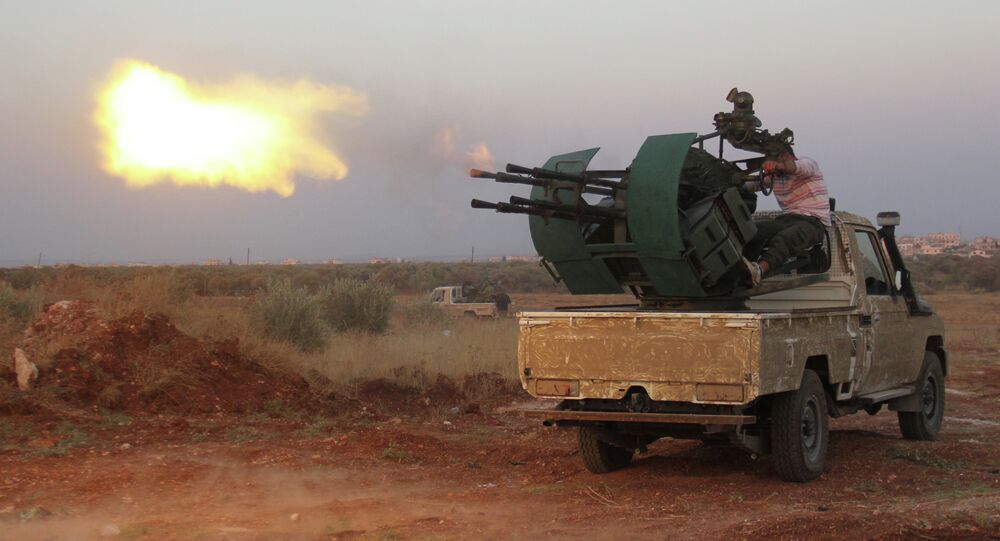 Analyst Blames US for Failing to Stop Funding Syrian Mercenaries

The aim of Washington's program to train the forces that are going against ISIL is to deliver arms to the Syrian opposition forces trying to topple President Assad, according to Scott Bennett, a former US Army officer and counterterrorism analyst.

© AFP 2021 / STR
ISIL Thugs May Swarm Europe if EU Refuses to Cooperate With Syria
In an interview with Sputnik, former US Army officer and counterterrorism analyst Scott Bennett said that the ultimate goal of Washington's program to train groups in the Middle East to fight the Islamic State is to supply arms to the Syrian opposition forces who are seeking to oust President Bashar Assad. Furthermore, he claims the US has supplied ISIL itself.

"The US is delivering weapons, ammunition and food to the Islamic State forces. It is an operation to use ISIL mercenaries as a destabilizing force [in Syria]," Bennett said.

He warned that Pandora's Box has already been opened and that these mercenary forces had turned into a "toxic residue" in Syria's political landscape.

© AFP 2021 / ZEIN AL-RIFA
An unidentified photographer stands next to rebel fighters from Jaysh al-Islam (Army of Islam) holding a position behind a sand barrier on August 25, 2015, on the frontline in the Bashkoy area, on the northern outskirts of Aleppo, where opposition fighters are battling Syrian pro-government forces

He also slammed Washington's Middle East policy and touted Russia's role in defeating Islamic State militants, a task that he said the White House has failed to implement.

"I really hope that Vladimir Putin' Russian influence in attacking ISIL will help create a coalition of unified countries with the honest desire and ambition to defeat the fanatics," Bennett said.

Additionally, he urged the United States to stop funding mercenaries, which he said Washington "amazingly fails to do."

© Flickr / kuhnmi
Syria Says Russia Has Every Right to Combat Islamic State on Its Soil
He referred to classified reports about a number of Gulf countries which are allegedly laundering money in Swiss banks, which were then handed to jihadists.

Last year, the Obama administration announced a program on training Syrian rebel fighters to combat the Islamic State in Iraq and Syria.

Earlier this week, General Lloyd Austin, head of the US military's Central Command, told the Senate Armed Services Committee that Washington's training program is behind schedule, and that the military's target of training 15,000 rebels in three years will not be met on time. It has only trained several so far.

Over 3Mln Displaced Amid Iraq's Fight Against Islamic State