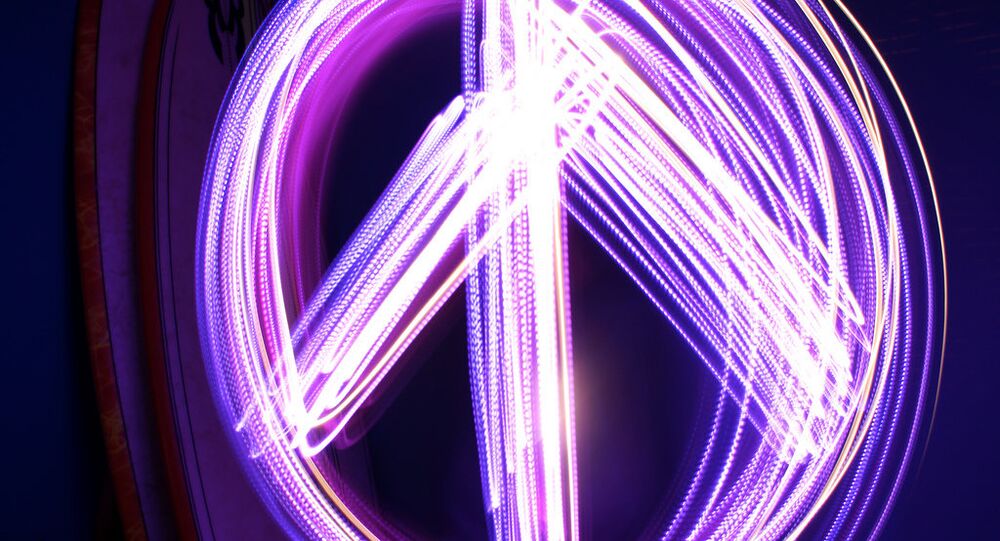 WASHINGTON (Sputnik) — Celente is an American trends forecaster, publisher of the Trends Journal, business consultant and author who makes predictions about the global financial markets.

“This peace movement is designed to create a platform to hold elected officials accountable for senselessly prompting war,” Celente, head of the Trends Research Institute, said. “It will drive a nationwide initiative to put peace on the ballot.”

Celente explained his Institute would work “with peace-minded historians and other experts to create a program that provides the tools to make peace a driving force in the halls of government and in the living rooms of Americans.”

He stated that Occupy Peace would promote five basic principles, including: no foreign entanglements; waging war only when imminent threats exist; and having zero tolerance for illegal wars.

© East News / Radius Images
UN Continues Contribution to Colombia-FARC Peace Talks
The remaining two principles focus on rebuilding the United States and not on nation building in other countries, and letting the American people vote on whether to fund wars.

“Our future is being robbed from us by murderous thieves. Their dream of a never-ending War on Terror has created a living nightmare,” Celente asserted. “These psychopaths hijacked our nation’s wealth as our economy declines.”

Since the 2001 invasion of Afghanistan and the 2003 invasion of Iraq, Celente noted, have cost the United States several trillion dollars, The cost of financing those wars, and the current US military involvement in Iraq, Syria and Yemen, could have rebuilt the US infrastructure, including railways, highways and bridges, he pointed out.

“First, close 120 to 150 US bases overseas. Second, secure the homeland and bring home the troops from around the world. Third, put the troops to work rebuilding our infrastructure and guarding our borders,” Celente proposed.

Occupy Peace would also be pushing for a referendum power on every US state ballot in the 2016 national elections.

“Congress no longer represents the American people. They have been paid off by the members of the industrial-military complex,” Celente argued. “Through the direct exercise of referendums, the people will tell Congress how to vote.”

Celente said he had been driven to found Occupy Peace by his concern that the United States was heading toward a disastrous global war.

“I see the first great war of the 21st century on the horizon. I want to fight for peace. I won’t die for war,” he said.

The current Syrian refugee crisis was leading to the first great war of the 21st century, the analyst warned.

© AP Photo / Evan Vucci
Obama, Saudi King Salman Discuss Urgency of Peace Talks in Yemen
“We now see the great immigration into Europe, the total collapse of the Middle East and the crisis spreading next into Europe.” It’s happening in front of everyone’s eyes.”

Celente concluded that unless current US policies are changed, he foresees wars of mass destruction, including biological warfare, nuclear weapons and dirty radiological bombs.

The Occupy Peace movement is to be launched at a rally on Sunday in Kingston, New York.