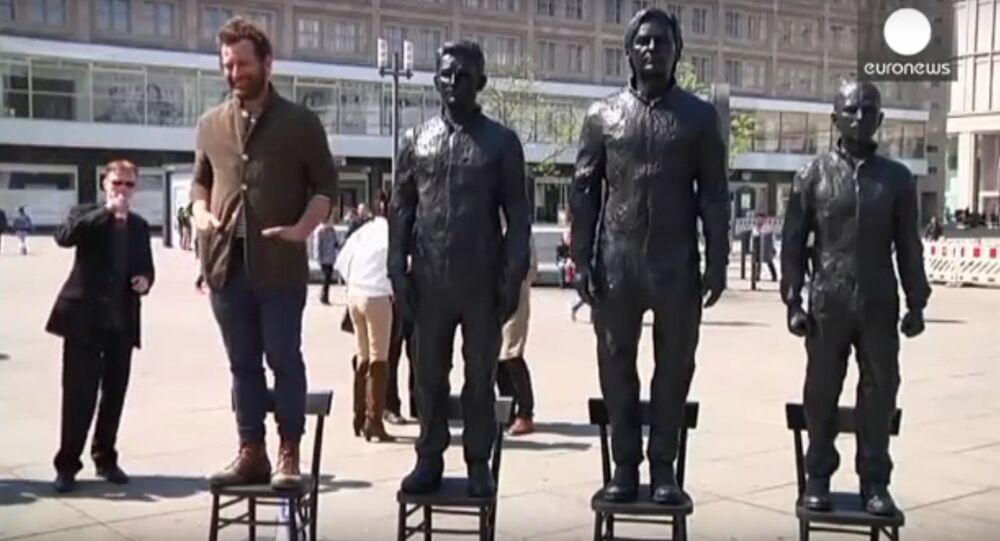 A bronze monument to the three whistleblowers who blew the lid on US spying was erected on Monday outside the UN office in Geneva, Switzerland, according to the monument’s official website.

© REUTERS / Svein Ove Ekornesvaag/NTB Scanpix
Snowden Cares About Human Rights Situation in Russia - Lawyer
MOSCOW (Sputnik) – The monument to courage, entitled "Anything to Say?" is a one-ton sculpture by Italian artist Davide Dormino that portrays Edward Snowden, Julien Assange and Chelsea Manning standing on three chairs, while the fourth one is empty.

"They all chose to get up on the chairs of courage… Some think they are traitors… You need courage to act, to stand up on that empty chair because it hurts," the artist explained.

Former US National Security Agency (NSA) contractor Edward Snowden has been stranded in Moscow after he leaked details of the US dragnet online surveillance in 2013. WikiLeaks founder Julian Assange has been holed up at the Ecuadorian Embassy in London for four years, while his military informant, Chelsea Manning, is serving a 35-year jail term in the United States.

"The Dormino statue pays homage to three who said no to war, to the lies that lead to war and to the intrusion into private life that helps to perpetuate war," the installation’s website said.

The temporary exhibition will remain at the Places des Nations until Friday. It was timed to coincide with the opening of the 30th session of the UN Human Rights Council on Monday.

Chelsea Manning’s Conviction Could Harm Her Chances of Parole - ACLU