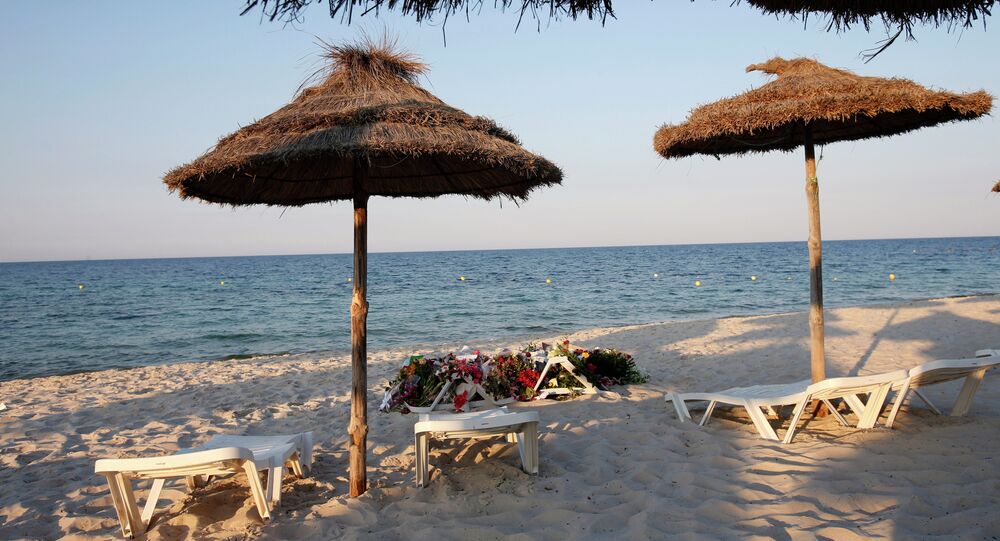 Tunisian Ambassador to Russia Ali Goutali said that the Russian tourist flow to Tunisia has nonetheless decreased, linked to a slowdown of the Russian economy and a depreciation of the ruble.

"The good news for us is that, luckily, the Russian government has not banned Tunisia as a destination for its citizens. We are very thankful for this friendly gesture. Russian tourists continue to visit Tunisia,” the ambassador said.

In 2015, Tunisia was shaken by two deadly shootings – at the Tunis Bardo National Museum in March and at a beach resort in the town of Sousse, in June. The two attacks, committed by Islamists, together killed about 60 civilians, mostly foreign tourists.

Following the Sousse massacre, the United Kingdom, Denmark and Ireland asked their citizens to avoid traveling to the North African country.

© Sputnik / Maksim Blinov
Russia Condemns Tunisia Resort Attack – Foreign Ministry
Goutali stressed that the Russian tourist flow to Tunisia has nonetheless decreased, linked to a slowdown of the Russian economy and a depreciation of the ruble.

“We have reached the record number of 300,000 tourists from Russia in 2013. In 2014, the number decreased slightly and reached 270,000 but this year the number would be below 100 thousand, a more than 50 percent decrease. It is more because of Russian ruble fluctuation rather than terrorism. We are sure that Russia will overcome its financial difficulties. Russia still remains for us a significant partner," Goutali said.

The Russian economy declined in 2014 due to dropping oil prices. As a result, the ruble lost about half its earlier value against the US dollar.

Also Ali Goutali said that Tunisia believes that the European Union will eliminate travel restrictions on the country shortly after Tunis lifts its ongoing state of emergency imposed after a deadly terrorist attack on a beach resort in June.

© AP Photo / Darko Vojinovic
Tunisia Massacre: Cameron Calls for Action Against 'Ancient Barbarism'
In June, a gunman shot tourists on a beach in the Tunisian city of Sousse, killing 38 people. Following the attack, Tunis introduced a state of emergency while the United Kingdom, Denmark, Ireland and some other EU states asked their citizens to avoid traveling to the North African country.

“The EU countries who placed the [travel] ban promised us to reassess the situation. We are sure they will review their decision and they will lift the ban in the near future. They will review the possibility of lifting the restrictions as soon as we lift the state of emergency," Goutali said.

Goutali explained the state of emergency, due to expire in October, “led to stability and now the situation is under control,” adding that authorities reassess the situation daily.

An earlier terrorist attack took place in Tunisia in March at the National Bardo Museum, in which gunmen killed 22 people and injured over 47, mostly tourists.