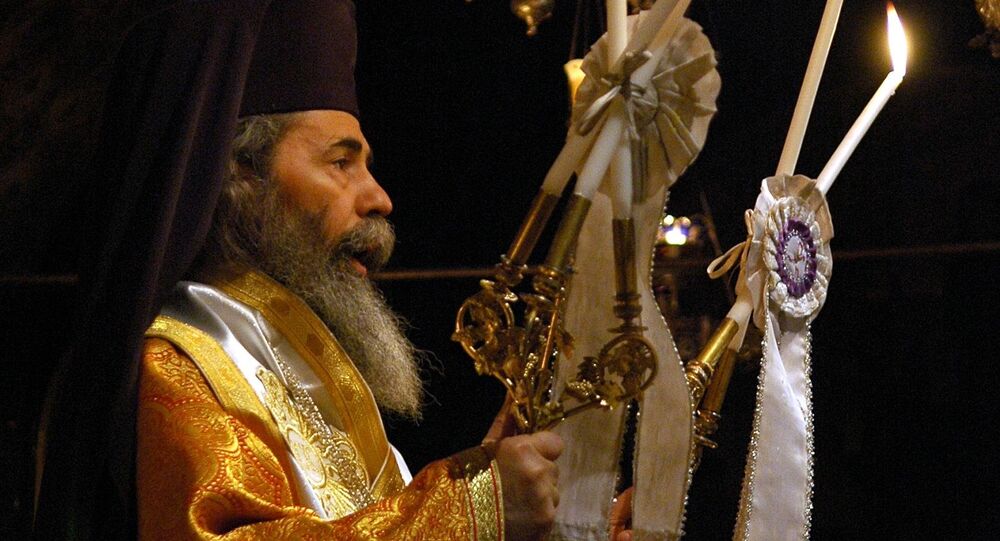 Patriarch Theophilos III of Jerusalem told a delegation of politicians from Ukraine's Verkhovna Rada his belief that Ukrainians and Russians have a familial relationship, and should live together in peace.

© Sputnik / Sergey Averin
Ukrainian Media in a Frenzy Over Botched Donetsk Poll Results
A group of politicians from Ukraine's Radical Party in Jerusalem were left distressed by the appeal from Patriarch Theophilos III to live in peace with Russians, as well as his belief that Ukrainians and Russians have a fraternal relationship.

"We believe that Ukrainians and Russians are one people," said Patriarch Theophilos, reported Verkhovnaya Rada deputy Andrey Lozovoy, a member of the group.

"The main thing is to make peace," said Theophilos, related an angry Lozovoy, who said he "just wanted to get up and walk out" after hearing the entreaty from the patriarch, which also suggested that the Orthodox churches in Ukraine enter dialogue on their unification.

According to Lozovoy, the delegation gave Patriarch Theophilos a detailed response to his reconciliatory suggestion, including criticism of metropolitan Onufry, who in August last year was elected head of the Ukrainian Orthodox Church of the Moscow Patriarchate.

Immediately after his election on August 13 Onufry declared his willingness to hold dialogue with his counterpart Filaret, head of the Kiev Patriarchate (unrecognized by most Orthodox churches), on the question of unification of the churches; his offer was refused by Filaret.

© Sputnik / Irina Gerashchenko
Moscow Slams Kiev Over 'Stubborn' Refusal to Help Own Citizens in Need
In his blog post on Korrespondent.net, deputy Lozovoy instead accused the Moscow Patriarchate of being the source of the delays in talks on the subject. He also revealed that "the head of the Ukrainian Orthodox Church of the Moscow Patriarchate holds a pointedly pro-Russian position."

"Further, he had the arrogance to pointedly not stand during a celebration of fallen heroes in parliament on May 8," Lozovoy wrote his response to Theophilos in the blog post.

In the aftermath of the celebration in May Onufry explained why he had remained seated in the Verkhovnaya Rada, when deputies stood up to hear the president's announcement of soldiers in the Ukrainian army who lost their lives carrying out what President Poroshenko calls 'anti-terrorist operations' against pro-independence fighters in Ukraine's eastern regions.

"During President Poroshenko's speech those present stood to greet the names of those who have been given the status of 'heroes of Ukraine'" for participating in military operations in eastern Ukraine, the church stated.

"His Beatitude metropolitan Onufry did not react to this speech like the rest of the guests and participants, in order to emphasize the necessity to urgently stop the war!"

The next argument Lozovoy related was to claim the voluntary mass transfer of parishes from the Moscow Patriarchate to the Kiev Patriarchate, and the accusation that priests in the former hold an "openly anti-state position."

Orthodox Church authorities in Ukraine have repeatedly called on the government of President Petro Poroshenko to investigate reports of religious persecution, violence and theft committed against members of the Moscow Patriarchate, including the seizure of its churches by Right Sector neo-nationalist militants.

"It is difficult to say, whether the Jerusalem Patriarch heard us or not," said Lozovoy, who remarked that nevertheless, he believes his words made an impact on the patriarch.

"At least, he listened to us, and it was visible that he was shocked."