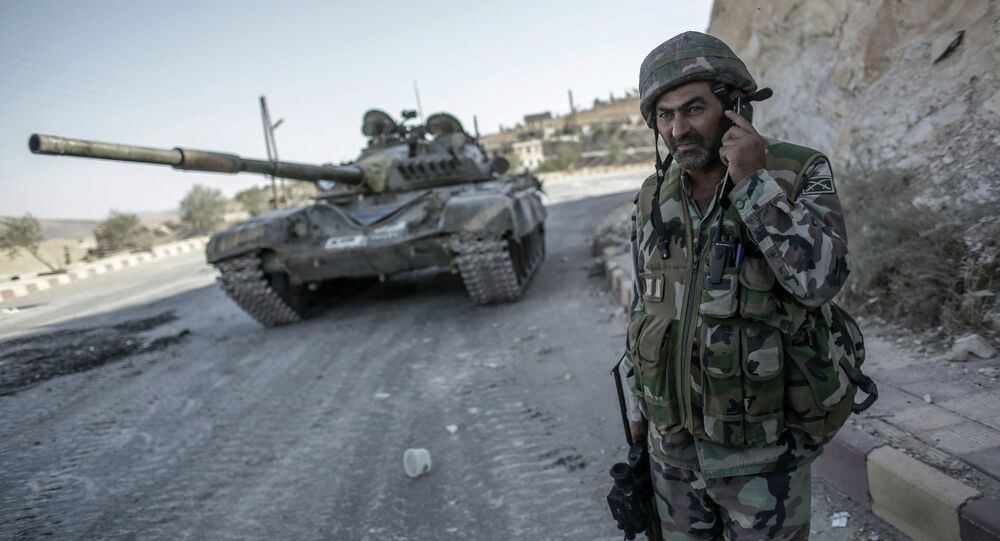 America's New Nightmare: How to Cope With Russia on the Ground in Syria

No matter how persistent Russia is in insisting that it supports not the mere regime of the Syrian President Assad but rather its fight against the Islamic State, Washington won’t listen: the US media is abuzz with fearmongering over Russia’s military aid to Damascus, trying to guess what it could mean and what to do next.

The US seems to have absolutely no clue how to react to the Russian activity in Syria. While some of its media sources opt to resort to hysteria, such as Fox News, which claims Damascus will soon be occupied by the Russian army, others prefer to look at different options, and are trying to compile something resembling an action plan.

© AP Photo / Richard Drew
The Russians are Coming! Fox News Declares Syria Putin’s New Crimea
The US-based financial agency Bloomberg has come up with two relatively adequate responses, and examines all the pros and cons for each one.

“The options are to try to confront Russia inside Syria or, as some in the White House are advocating, cooperate with Russia there in the fight against the Islamic State (ISIL),” it said.

“For some in the White House, the priority is to enlist more countries to fight against the Islamic State, and they fear making the relationship with Russia any more heated.

They are seriously considering accepting the Russian buildup as a fait accompli, and then working with Moscow to coordinate US and Russian strikes in Northern Syria, where the US-led coalition operates every day,” the agency says.

© Sputnik / Vladimir Pesnya
Russia to Continue Delivering Military Equipment to Syria
Others, however, seem to be so obsessed with the idea of toppling President Assad, that they are paying no attention to the IS threat; they will regard any cooperation with Moscow as a real failure.

“For many in the Obama administration, especially those who work on Syria, the idea of acquiescing to Russian participation in the fighting is akin to admitting that the drive to oust Assad has failed. Plus, they fear Russia will attack Syrian opposition groups that are fighting against Assad, using the war against the Islamic State as a cover.”

However, the real fear for the aforementioned group is that “the US has no real leverage to fight back”.

If “Obama decides not to accept the Russian air force presence in Syria”, the outlet elaborates, he will face another set of options.

“The US could impose new sanctions on Russia, although the current punishments related to Ukraine have not changed Putin’s calculus, and there’s little chance the European countries would join in on a new round.”

© REUTERS / Alaa Al-Faqir
Europe Needs to Follow Russia's Lead on Syria – Norwegian Press
“The US might warn Russia that its base is fair game for the opposition to attack, but that could spur Putin to double down on the deployment.”

“The US could try to stop the flow of Russian arms, but that would mean pressuring countries such as Iraq to stand up to Putin and Iran, which they might not agree to.”

“The White House’s concerns about escalating tensions with Russia inside Syria are legitimate, but cooperating with Russian forces on the ground or in the air would undermine whatever remaining credibility the US has with the Syrian opposition and the Gulf States that support it.”

“The US may not be able to stop Russia’s entry into fighting the Syrian civil war, but at a minimum America shouldn't be seen as colluding with Moscow. If that happens, the suspicion that Obama is actually working to preserve the Assad regime will have been confirmed.”

5 Messages Russia Is Sending to the World via Syria

© REUTERS / Hosam Katan
Assad or No Assad? US Hates Syrian Leader but Now Scared to Overthrow Him
Meanwhile, The National Interest, another US outlet, has come up with its own list of what Russia is trying to tell the world.

First, it says, “the Kremlin is clearly signaling that it plans to take an active role in setting the agenda in the Middle East — and not to passively accept an American vision for how the future should unfold”.

Second, “Putin is making it clear that he will not accept Washington's default position that the removal” of President Assad “is a path to greater long-term stability in the Middle East.”

Third, “Russia is more confident of its position in Ukraine”, with “Moscow retaining most of the leverage.”

© Sputnik / Andrey Stenin
Russia Sends Firearms, Grenade Launchers to Syrian Army to Counter ISIL
Fourth, “the Kremlin enforces its red lines. Just as Moscow would not permit the Donbass separatists to face catastrophic defeat last summer in Ukraine, Russia has signaled that it will not sit by and allow Bashar Assad to be overthrown or removed by outside military action.”

And, finally, fifth, “for Middle Eastern countries, like Egypt and Azerbaijan, that have opposed Russian policy in Syria, Putin's decision to up the ante may lead them to reassess whether the path to a viable settlement resides not in Washington, soon to be increasingly distracted by an election campaign, but through Moscow.”