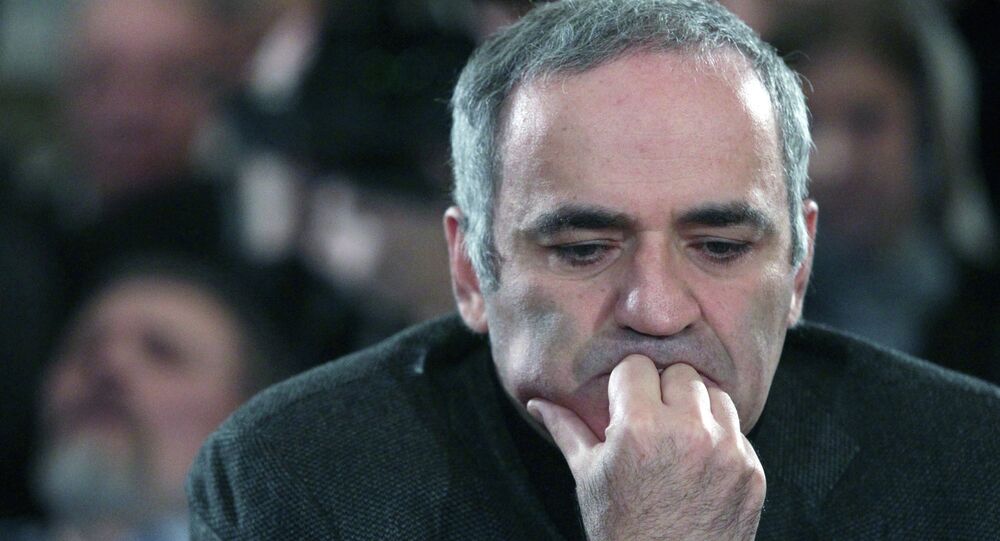 US May Prosecute Russian World Chess Champion Kasparov Over Corruption

The Assistant to FIDE President said that the US authorities have grounds to start prosecution of former World Champion Garry Kasparov.

Last year, a leak revealed that Singaporean Ignatius Leong, who was the general secretary of the FIDE under its long-standing president Kirsan Ilyumzhinov, running for re-election, was paid to join Kasparov’s presidential campaign.

© Sputnik / Valery Melnikov
Latvia Shelves Kasparov’s Request for Citizenship
Kasparov reportedly negotiated a deal with Leong, in which the latter would help Kasparov’s presidential campaign in exchange for $500,000. Kasparov also agreed after his election to open a new federation office in Singapore, to be run by Leong, for which he would be paid an undisclosed amount.

"Independent experts have outlined accounts of corruption on the part of Kasparov. Singaporean Chess Federation reserves the right to to submit their cases to the competent judicial authorities, and concerning corruption, the country's law is very tough. In theory, the United States can initiate criminal investigations as the matter was first made public via The New York Times," Berik Balgabaev told RIA Novosti on Tuesday.

Following the leak, Kasparov disclosed the confidential agreement, but it did not contain the promise to pay should Leong help Kasparov become president of FIDE. However, Kasparov was long surrounded by rumors and controversies, and Ilyumzhinov was re-elected as FIDE President, by a wide margin with 110 votes against Kasparov’s 61.

Kasparov, 52, is now a human rights activist residing in the United States. Earlier, he has been a member of numerous opposition groups and coalitions in Russia, where he was briefly arrested several times.