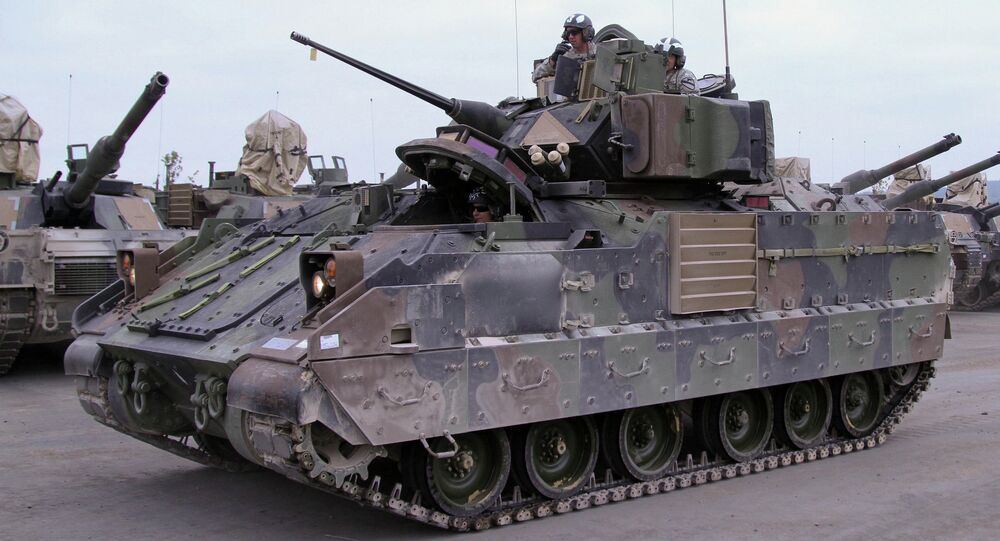 American tanks and other armored vehicles which are part of the United States Army Europe (USAREUR) will soon reportedly be repainted from desert tan to woodland green.

USAREUR plans to repaint its tanks and other armored vehicles from desert tan to woodland green, in a move that comes amid  eastern NATO members' concerns about Russia’s alleged role in the ongoing civil war in Ukraine, US media reports said.

© AFP 2020 / PETRAS MALUKAS
Members of the US Army 1st Brigade, 1st Cavalry Division, unload Bradley Fighting Vehicles at the railway station near the Rukla military base in Lithuania, on October 4, 2014

As for the current color of USAREUR's military equipment, it was previously selected for operations in the Middle East.

No more wars in the desert? US: Sand colored tanks and armored fighting vehicles to be repainted green. #p2 #Ukraine https://t.co/uJ0ikuNTkI

"It is about deterrence and reassurance, and paint — all of a sudden that matters," he was quoted by the US newspaper Stars and Stripes as saying.

He made the comments during this week's tour of USAREUR's Coleman Barracks in the German city of Manheim, where nearly 200 Bradley fighting vehicles, tanks and other heavy vehicles are due to be used by troops rotating through Eastern Europe and the Baltic states.

© Sputnik / Maksim Blinov
US Troops in Ukraine Violate Minsk Deal - Russian Foreign Ministry
In June 2015, US Defense Secretary Ashton Carter promised that the US will deploy heavy weapons, including tanks, armored vehicles and artillery, in a number of European nations in the next few months. In particular, the military hardware is set to be delivered to Bulgaria, Estonia, Latvia, Lithuania, Poland and Romania.

Earlier this year, Hodges went as far as warning that NATO should remain united in the face of what he described as a "real threat," allegedly emanating from Russia.