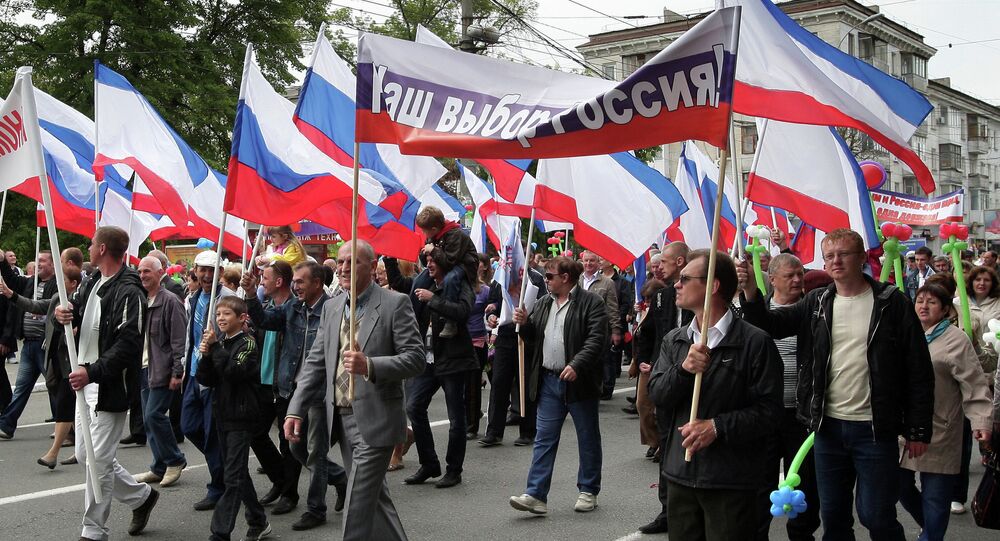 Russia seeks the understanding of its position on Crimea and Ukraine, but the West has turned a deaf ear to its arguments, according to Gregory Clark, former first secretary at the Australian Embassy in Moscow.

© Sputnik / Vasiliy Batanov
Ukrainian Notaries Tacitly Recognize Crimea as Part of Russia
Moscow's stance on Crimea being an essential part of Russia deserves to be taken into consideration, but the West prefers not to heed this, Gregory Clark, former first secretary at the Australian Embassy in Moscow, said in his article titled "Russia wants to be understood," published by the Japan Times newspaper.

Touching upon Crimea's territorial ownership, the former Australian diplomat recalled that during the Soviet times the east of Ukraine resembled "a little Russia".

"The fact that so many there would welcome some kind of autonomy once the Kiev administration began to unravel was inevitable," Clark said.

He specifically pointed to the fact that most of the one million refugees from the fighting in eastern Ukraine decided to go to Russia instead of relocating elsewhere in Ukraine.

As far as Crimea is concerned, it was "totally Russian" in "Soviet days," according to Clark, who visited the peninsula at the time.

"It is still very Russian, though genuine efforts are also being made to revive the Turkic language of the surviving Crimea Tartar peoples," Clark said.

He also noted that the Kiev authorities have failed to achieve much success in popularizing the Ukrainian language in Crimea.

Moreover, he added, Moscow has a spate of judicial arguments for calling Crimea an essential part of Russia. In particular, Clark pointed to the fact that then-Soviet leader Nikita Khrushchev's decision to hand over the peninsula to Ukraine in 1954 was "technically illegal," because "it never got to be ratified by the Supreme Soviet" of the former Soviet Union.

Additionally, Clark poured cold water on allegations by those in the United States who insist that Moscow’s decision to detach Crimea from Ukraine’s sovereignty is a clear violation of international law and deserves sanctions.

"But in that case the West would be very guilty over Kosovo, where bombs were used to deny Serbian sovereignty. In Crimea they say they relied mainly on a referendum," Clark concluded.

© Sputnik / Mikhail Fomichev
On Stand-By: Russian Carrier Fighters Make Training Flights in Crimea
The Crimean peninsula split from Ukraine to rejoin Russia in March 2014 after a referendum in which over 96 percent voted in favor of secession.