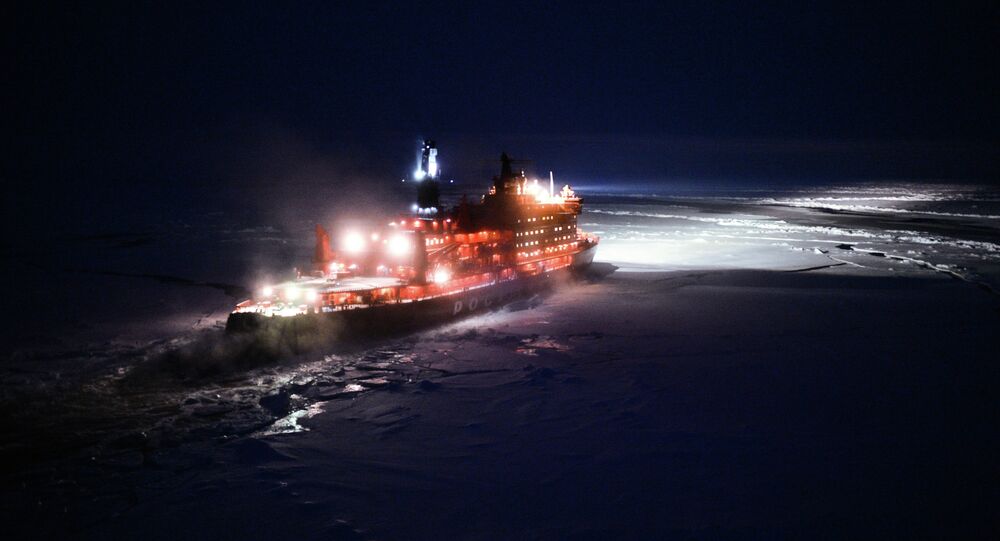 As Russia files its revised Arctic shelf expansion claim with the UN seeking to increase its Arctic shelf borders, let’s have a look at what the whole story is actually all about.

The Arctic consists of land, territorial waters and international waters. All land and territorial waters in the Arctic belong to one of five countries: Russia, Canada, Norway, Denmark (through its autonomous territory Greenland) and the United States (via Alaska).

Control of the area is regulated by international law, as with other parts of the Earth. Under the 1982 UN Convention on the Law of the Sea (UNCLOS), international waters, including the North Pole and the region of the Arctic Ocean surrounding it, are not owned by any country.

© AP Photo / RTR Russian Channel
An operator of Russian mini-submarine plants a titanium capsule with the Russian flag during a record dive in the Arctic Ocean under the ice at the North Pole, in this image made from Russian television broadcast on Friday, Aug. 3, 2007

© Flickr / US Geological Survey
Russia Files Revised Arctic Shelf Expansion Claim to UN
Following the ratification of the UNCLOS, each coastal country had a ten-year period to make claims to an extended continental shelf which, if validated by the UN, would give it exclusive rights to resources on or below the seabed of that part of the extended shelf.

However, in order to make such a claim, the country should prove that the shelf is a geological extension of its land territory.

According to recent estimates, the Arctic shelf is believed to hold approximately 30 percent of the world's undiscovered natural gas and 15 percent of its oil, with the majority of these resources remaining offshore.

Norway ratified the convention in 1996 and by 2006 it had submitted its claim to the UN Commission on the Limits of the Continental Shelf.

In 2009 it became the first Arctic nation to settle an agreement, according to which it got three new areas of its continental shelf, covering about 235,000 km2, or three-quarters of the size of its mainland.

© Sputnik / Mikhail Voskresenskiy
Longyearbyen, the capital of the Spitsbergen Archipelago, on the Greenland Sea shore.

The original Norwegian claims presented to the UN commission in 2006 had requested 250,000 km2.

Russia ratified the convention in 1997.  On December 20, 2001, Russia made an official submission to the UN, where it proposed to establish the outer limits of the continental shelf of Russia beyond the 200-nautical-mile (370 km) Exclusive Economic Zone, but within the Russian Arctic sector.

© Sputnik / Igor Podgornyi (File)
UN Commission to Consider Russian Bid for Arctic Shelf Only in 2016
The territory claimed by Russia in the submission is a large portion of the Arctic within its sector, extending to but not beyond the geographic North Pole.

One of the arguments was a statement that the Lomonosov Ridge, an underwater mountain ridge passing near the Pole, and Mendeleev Ridge on the Russian side of the Pole are extensions of the Eurasian continent.

The application was rejected in 2002 due to a lack of geological evidence.

On August 2, 2007, a Russian expedition called Arktika 2007, composed of six explorers led by Artur Chilingarov, employing MIR submersibles, for the first time in history descended to the seabed at the North Pole. There they planted the Russian flag and took water and soil samples for analysis, continuing a mission to provide additional evidence related to the Russian claim to the mineral riches of the Arctic.

© AFP 2021 / TIM EXTON
Shell Begins Drilling in Arctic Off Alaska’s Coast
This was part of the ongoing 2007 Russian North Pole expedition, and was conducted as part of the 2007–2008 International Polar Year.

On August 4, 2015, Russia resubmitted its bid, which contained new arguments based on "ample scientific data collected in years of Arctic research", regarding territory in the Arctic to the United Nations. Via this bid, Russia is claiming 1.2 million square kilometers (over 463,000 square miles) of Artic sea shelf extending more than 350 nautical miles (about 650 kilometers) from the shore.

According to Deputy Spokesman for the Secretary-General Farhan Haq, Russia's bid for the expansion of its Arctic shelf border will be considered by the UN not earlier than in February or March of 2016.

Denmark ratified UNCLOS in November 2004 and in 2014 it submitted its claim for approximately 895,541 square kilometers of the Arctic seabed – an area 20 times larger than Denmark itself.

It became the first country to claim ownership over the North Pole itself.

© Sputnik / Vladimir Astapkovich
Russia to Deliver 140,000 Tonnes of Cargo for Troops in Arctic
It became the fifth Danish territorial claim in the Arctic, with previous attempts occurring in 2009, 2010, 2012, and 2013. The application is set to be considered only after Russia’s claim.

Canada ratified the convention in November 2003; ten years later it announced that it would file a claim which would include the North Pole but asked for more time to prepare the application.

The US had not ratified the UN Convention and, therefore, has not been eligible to file an official claim requesting the extension of its control of the continental shelf.

The major obstacles facing ratification are the provisions of Part XI of the Convention on the Law of the Sea, relating to minerals on the seabed outside any state's territorial waters or EEZ (Exclusive Economic Zones). It establishes an International Seabed Authority (ISA) to authorize seabed exploration and mining and collect and distribute seabed mining royalties.

The US argues that the treaty was unfavorable to American economic and security interests, and is attempting to establish an alternative regime for exploiting the minerals of the deep seabed.