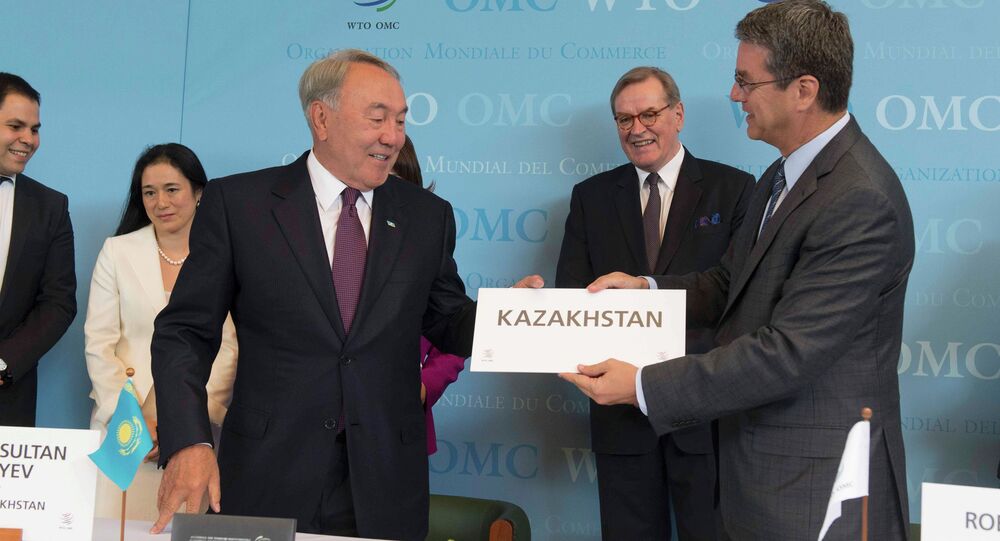 Kazakhstan is expected to become the 162nd member of the WTO by the end of 2015.

The northern Central Asian nation is expected to officially become the 162nd member of the WTO by the end of 2015, once all the procedural formalities have been dealt with.

Azevedo handed Nazarbayev a sign with the inscription "Kazakhstan," symbolizing the end of the negotiation process, at the conclusion of the signing ceremony.

The Kazakh president called July 27 a historic day, hailing changes in the national economy that came about during the accession talks for making Kazakhstan "stronger and more open."

© Sputnik / Ruben Sprich
WTO Agrees on ‘Landmark’ Elimination of Tariffs on IT Products
"WTO countries account for over 90 percent of our foreign trade turnover… The geography of our relations has expanded," Nazarbayev stressed, noting the 18-fold increase in per capita GDP and $120 billion extra in annual foreign trade.

Azevedo welcomed Kazakhstan’s accession to the Geneva-based trade group as a harbinger of growth in employment and quality of life.

Earlier in the day, the chairwoman of the WTO Working Party on the Accession of the Republic of Kazakhstan Vesa Himanen submitted a 1,248-page package of documents for the Council’s approval.

Kazakhstan has been negotiating its accession to WTO since 1996, which concluded successfully on June 10, 2015.

WTO regulates the rules of trade between nations globally. It provides producers of goods and services, exporters and importers with a framework for negotiating trade agreements and settling disputes.