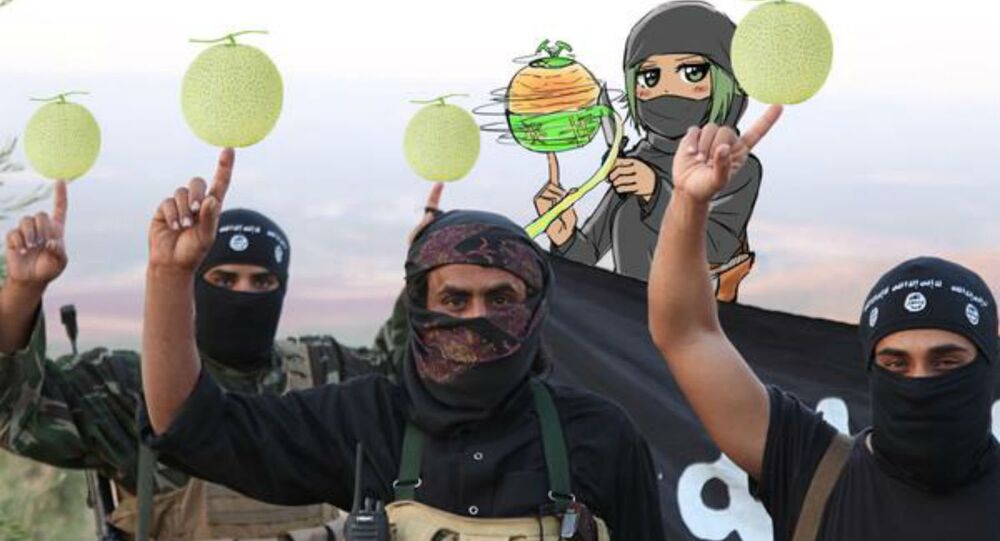 As many activists and government organizations struggle to counter the self-proclaimed Islamic State’s violent propaganda, a Japanese group has come up with what may just be the most creative idea yet – spamming the terror network’s online activity with cuteness.

Ever since IS began making headlines after seizing swaths of territory in Iraq and Syria, a search of the group’s name online will mostly yield gruesome images of violence perpetrated by the black-clad fighters. The group’s online reach has in part been due to a sophisticated propaganda campaign through social media, one that many, including the US government, have failed to counter.

Donning the terrorists’ black garments, the manga-style character is the creation of a Japanese group of anti-IS activists under the Twitter handle @ISISVipper. She’s an adorable 19-year-old girl with oversized green eyes and green hair, typical of anime characters, with a predilection for delicious watermelons.

You might be wondering what an anime character could possibly do to counter a sophisticated and violent propaganda campaign, but it’s actually surprisingly simple. ISIS-chan’s purpose is to neutralize the horrific images propagated by the terror group by hijacking their hashtags and posting cute images.

"The World Wide Web is our battlefield," the group told CNN Money. "We want to change the meaning of the term ISIS."

According to Haaretz, the campaign began in January on one of Japan’s most popular text board site 2channel, and followed a call-to-arms by the hacktivist group Anonymous. At the time, Anonymous posted a list of 750 Twitter accounts associated with the terror group, some of which have over 10,000 followers. ISIS Vipper responded by flooding these accounts with images of ISIS-chan.

A member of the group, who goes by the name on his Twitter account GenKnoxx, explained to CNN that the campaign began after IS executed two Japanese hostages in January. Unable to retaliate any other way, Japanese animators Photoshopped pictures of the graphic execution, replacing the killer’s knife with a banana.

"They did it to make these people – who try to be terrifying – look ridiculous," he said. "That’s the idea. To de-fang ISIS."

According to the group, they have gathered over 3,000 images so far from a number of anonymous submitters.

While this means that there are a lot more ISIS-chans out there, the group still has a long way to go to beat IS and completely eradicate their gruesome images from the web.  Searching "ISIS" on Google in Japan, where the images are most popular, still yields 334 photos of the terror group’s brutal crimes before any pictures of ISIS-chan.

Since Google’s PageRank algorithm ranks search results based on the popularity of an image, the group still needs to produce many more ISIS-chans to defeat IS in the online propaganda battle. Seeing how the image has already spread well beyond Japan in under a year, though, ISIS Vipper might be on the right track.