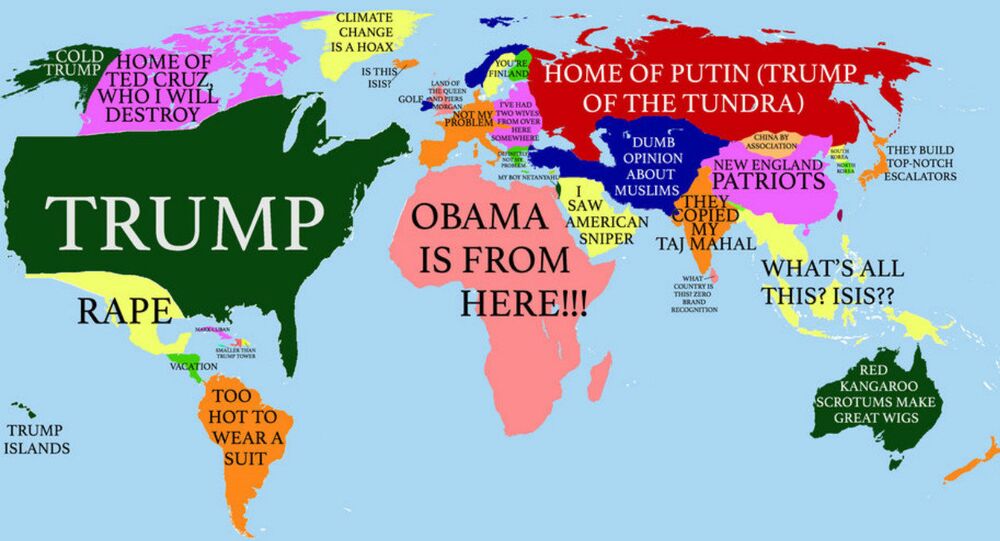 Donald Trump’s neglectful, dismissive and somewhat incendiary remarks about immigrants coming to the US prompted one editor at HuffPost Comedy to come up with an idea of how the US real estate magnate sees the globe. So what does the GOP candidate apparently see when looking at the world map?

Some larger countries are lucky enough to be honored with their own name,  such as the US which has been relabeled "Trump", while curiously enough Russia is simply called “Home of Putin”.

The whole continent of Africa is also fortunate to receive recognition, although on Donald's map it simply says “Obama is from here!”

Not that lucky is the whole of South America, as it is “Too Hot to Wear a Suit”. Mexico, which is part of his native North America, is simply referred to as “Rape”, following Trump's remarks on immigrants, who are "bringing drugs, they're bringing crime, they're rapists, and some, I assume, are good people."

Canada has gone to his presidential contender Ted Cruz, “who [he] will destroy”.

Less lucky are the Europeans, who are “not his problem” and the Scandinavians who are all marked as “You’re Finland”, a country he is somehow aware of.

Great Britain is marked as “Land of the Queen and Piers Morgan”; at least one fellow colleague deserves a land.

Eastern Europe is not identified, though the politician has  apparently “had two wives from over there somewhere”.

The least lucky are the smallest countries. While Middle East is “definitely not his problem”, Much of Southeast Asia and, for some reason, Iceland is simply labelled as “ISIS?”