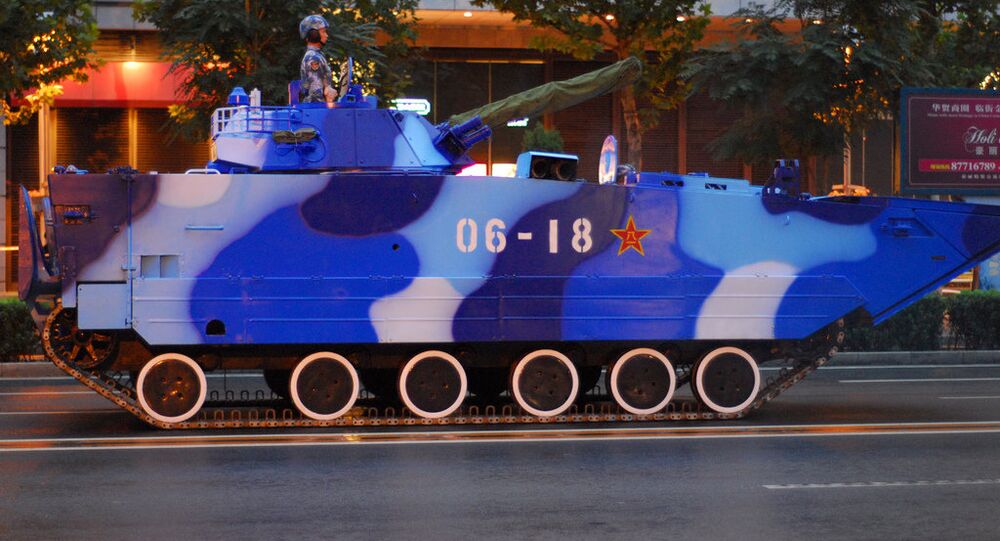 A respected American bi-monthly international affairs magazine has come up with an analysis of what China’s military will look like in the next decade and put forward a number of reasons why it won’t be able to pose a substantial threat to US global dominance, but is it the full story?

The National Interest magazine has come up with a benchmarking analysis of what China’s military will look like ten years from now, compared to the US, concluding that it won’t be pose a credible threat to the prevailing US global dominance.

The evaluation starts by looking at the operational experience of the Chinese People’s Liberation Army (PLA), its Navy (PLAN) and Air Force (PLAAF).

“One area in which China remains dramatically behind the United States is in operational experience,” it stated.

© Flickr / US Pacific Fleet
PEARL HARBOR (Sept. 6, 2013) Members of the Chinese community in Hawaii greet visiting sailors of the Chinese People's Liberation Army-Navy upon their arrival to Joint Base Pearl Harbor-Hickam

The series of “wars on terror” have been positive for the US: they “have given its armed forces tremendous experience in the day-to-day execution of military force,” while Chinese Armed Forces “lack such hands on experience.”

The magazine is convinced that in the coming decade Beijing will remain without experience, as “it’s not clear that China is planning to start an endless, pointless series of wars in order to acquire it.”

© CC BY 2.0 / Expert Infantry / Best Army Photos 2
Russia vs China: US Can Afford Only One to Top Its Terror Roll
“In every war, the US armed services grow closer together, developing the procedures and communications techniques they need in order to perform as an effective team.”

“In every peace, the US armed services grow farther apart, as each pursues internal, parochial goals at the expense of joint training, procurement, and planning.”

The military conflicts the US is involved in, have contributed to this aspect as well.

On the other hand, the outlet states, “as of yet, there’s not much indication that the land forces of the PLA, the Second Artillery, the PLAAF, and the PLAN have engaged in the work necessary to make them function as a coherent whole.”

China has an additional disadvantage in its  “depressing dependence on Russian technology and Russian suppliers.” The projections however are that in the next decade China will “shed much of its remaining dependence.”

© AP Photo / Mindaugas Kulbis
The Pentagon’s 2015 Military Strategy: Old Cold War Foes, New Hypocrisies
“The next decade should see the final emergence of the Chinese military-industrial complex from the Russian shadow, along with the end of Chinese dependence on Russian supply and technology.”

“An almost complete absence of allies” is yet another of China’s biggest problems “with respect to the military balance with the US.”

“The next decade will almost certainly not see the development of a China-centric alliance system; indeed, the opposite (a China-phobic alliance) is far more likely.”

Another prediction about the potential reach of the Chinese military simply concludes that although “the increase in firepower and presence means that the Chinese military has a greater effective reach than it has ever enjoyed,” over the next decade it will be greater than “any military in the world, other than the US.”

The final conclusion provides comforting reading to the US audience: though the “Chinese military will continue to change and adapt. This adaptation has implications beyond the US-China relationship; it will affect how Beijing interacts with Russia, Japan, India, and the nations of Southeast Asia.”