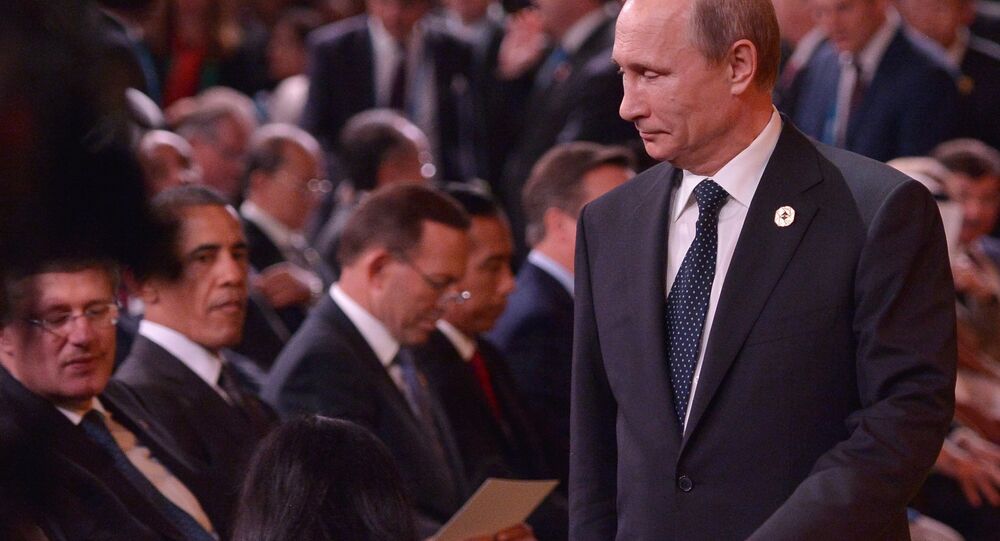 The Obama administration, despite numerous accusations of weakening its grip, is pursuing a very aggressive foreign policy, which proved to be inefficient last year, according to US political analyst Sherle R. Schwenninger.

© AP Photo / Susan Walsh
Say What? Obama Claims He Reinstated US as World’s Most Respected Country
Washington continues to pursue a very aggressive foreign policy, which proved inefficient in the past year, and it can be illustrated by the White House's relations with Russia, US political analyst Sherle R. Schwenninger said in his article, published by the US magazine The Nation.

The article, titled "How Obama Went From Being a Peace Candidate to a War President", drew special attention to the White House's continued efforts to isolate Russia.

"Consider the utter senselessness of our actions over the past year. While Washington has readied NATO to deter what it sees as Russian aggression against Eastern Europe, all the while congratulating itself on isolating Russia, Moscow has been reshaping the Eurasian economy — specially the energy economy — forging deeper ties with China, India, South Korea, and Japan,"  Schwenninger said.

He also noted that although Washington has repeatedly been criticized for leniency, its foreign policy is, in fact, too aggressive and sometimes even poses a threat to the national interests of the US itself.

While some accuse the current administration of weakening its grip, it has actually expanded its goals on the global stage, increasing interference in the policies of other countries, in some cases very actively, according to Schwenninger.

© AFP 2020 / SERGEY POLEZHAKA
Donbass Offers Constitutional Reform Amid Increased Tensions in Ukraine
He pointed out that adding to the escalation of the conflict in Ukraine and supporting Kiev's military operations last year were not in the interests of the United States. He said that Washington knew full well that these military operations would further contribute to the economic crisis in Ukraine, leading to senseless bloodshed. "But again the Obama administration did so," Schwenninger said.

According to him, it would have been possible to avoid the Ukrainian crisis, "had key figures in the Obama administration not actively conspired to bring down the Yanukovych government, and especially if the administration had not, in effect, supported the illegal February 22 street coup in Kiev."

It is also incorrect to allege that the current US administration is "indecisive and too inclined toward diplomacy", Schwenninger said, referring to Russian President Vladimir Putin and his Syrian counterpart Bashar Assad.

"If anything, the administration has been too quick on the draw — declaring that Assad must go and that Putin must be punished — before it has thought through the implications of its declarations or, in some cases, even before it has had the facts to back up its position," Schwenninger  said.

He added that on the whole, the US President is pursuing a policy which is endorsed by those who support Washington's interference in other countries' domestic affairs. "And the results have been nothing short of the disaster that candidate Obama might have predicted," Schwenninger concluded.

UK Hosting of US Strategic Missiles ‘Definitely an Option’