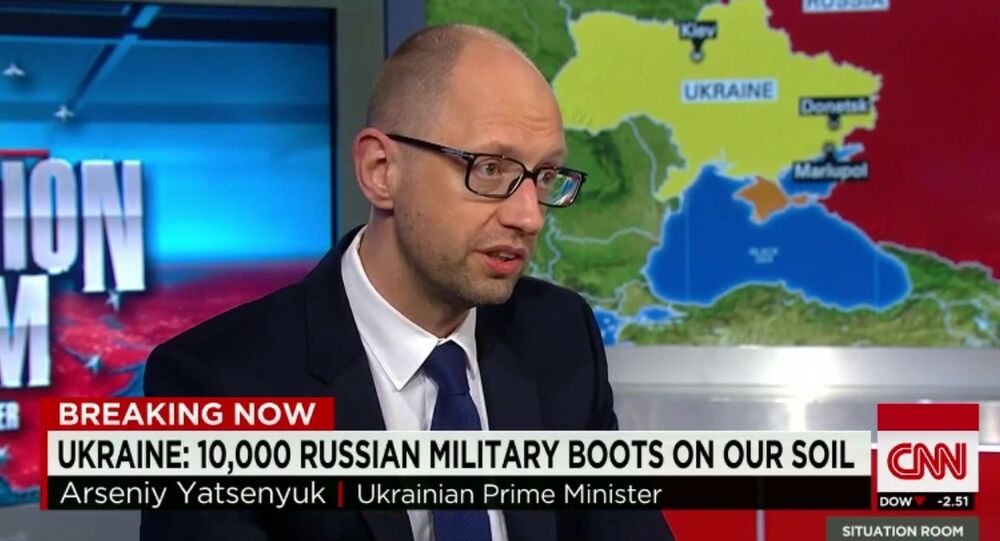 Prime Minister Yatsenyuk hasn't abandoned hope of convincing the US that it should continue to support Ukraine, preferably by offering military aid, and has once again resorted to blaming so-called “Russian aggression” in hopes to get the US to help create “a strong durable Ukrainian military,” which Kiev needs “to implement the Minsk deal.”

“I want to be very clear – more than 10,000 Russian military boots are on Ukrainian soil. In addition, about 30,000 are Russian-led terrorists, trained by the Russian FSB and Russian army," the prime minister stated in an interview with CNN.

The Ukrainian politician opted not to elaborate on what these estimates were based on.

The host, however, seemed to get it right.

“So, what it is going to take to get rid of them?” he questioned.

“Well, we expect that this so-called Minsk deal will be a good way to de-escalate the situation. And we still believe that this is the only solution,” Yatsenyuk said, quickly adding:

“But it order to make this solution viable and in order to implement the Minsk deal, we need to underpin the diplomatic efforts with a strong durable Ukrainian military. We need to retain unity between the EU and the US and to act boldly,  wisely and in concert against the Russian-led aggression.”

The host seemed to understand this one as well.

“What’s the bottom line message you are bringing to the US right now? I assume you want lethal military equipment. Based on everything I am hearing, the US does not want to do that. What is your bottom line request?” he asks.

© AP Photo / Efrem Lukatsky
Yatsenyuk Pledges to Reclaim Crimea, Donbass, Pleads for Washington's Help
“To send a strong signal that the Ukrainian nation is united. That we want to succeed. That we’ve been fighting for European values, for our freedoms and liberties. That is everything that the US stands for. So, we have to do it jointly to make this world better and to make Ukraine a success story.”

The host, however, wouldn’t let it go.

“And tell our viewers here in the US, in North America why this should matter to them?”

It yet remains to be seen whether the Ukrainian politician managed to convince the US audience and whether the numbers he cited are enough.