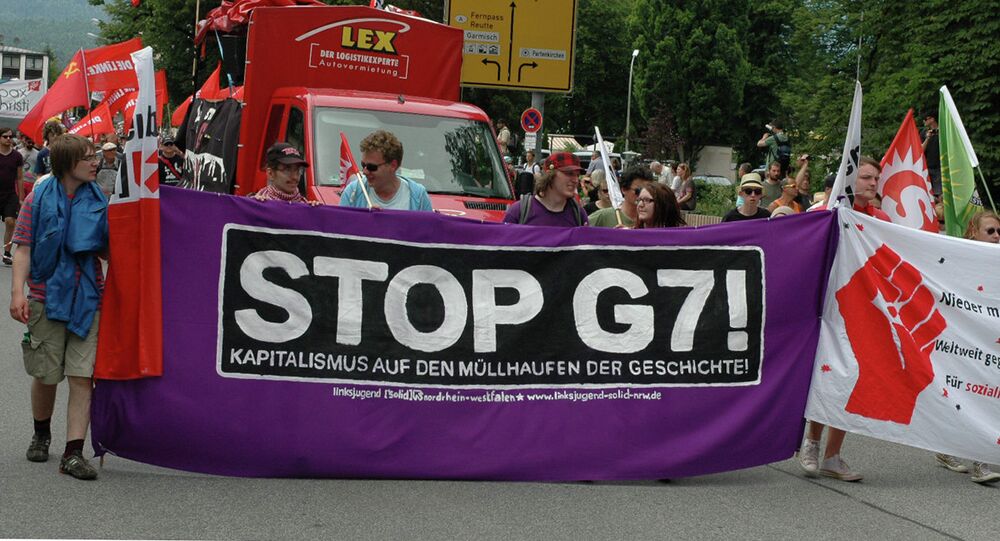 Freedom and pluralism is the matter for those who demonstrate, especially in Group of Seven (G7) countries, European Council President Donald Tusk said Sunday, commenting on recent protests at Garmisch-Partenkirchen resort town, just a few miles away from the G7 summit's venue, Bavaria’s Schloss Elmau hotel.

© AFP 2020 / CHRISTOF STACHE
G7 Summit Begins in Bavaria to Discuss Global Security, Foreign Policy
GARMISCH-PARTENKIRCHEN (Sputnik) – On Saturday, thousands of people gathered in the Bavarian mountain resort town of Garmisch-Partenkirchen to protest against the G7 policies, including NATO military expansion in Europe, the bloc's involvement in the Ukrainian crisis and the proposed Transatlantic Trade and Investment Partnership (TTIP) deal.

"I believe that G7 is the best guarantee that those values, freedom and pluralism, will survive. We [G7] do not need to apologize. Especially in G7 countries, people can demonstrate, they can think what they want and can say what they want. This is trivial truth but we need to say it openly from time to time," Tusk said at a press conference.

The 41st G7 summit brings together leaders of Canada, France, Germany, Italy, Japan, the United Kingdom and the United States.

Russia will not attend the event as its participation in the group’s meetings was suspended in March 2014 over Crimea's reunification with Russia and escalation of internal conflict in eastern Ukraine.

The situation in Ukraine will be on the agenda of the G7 summit underway in Bavaria, Germany.

Over 3,500 Activists Gathered in Anti-G7 Rally in Germany