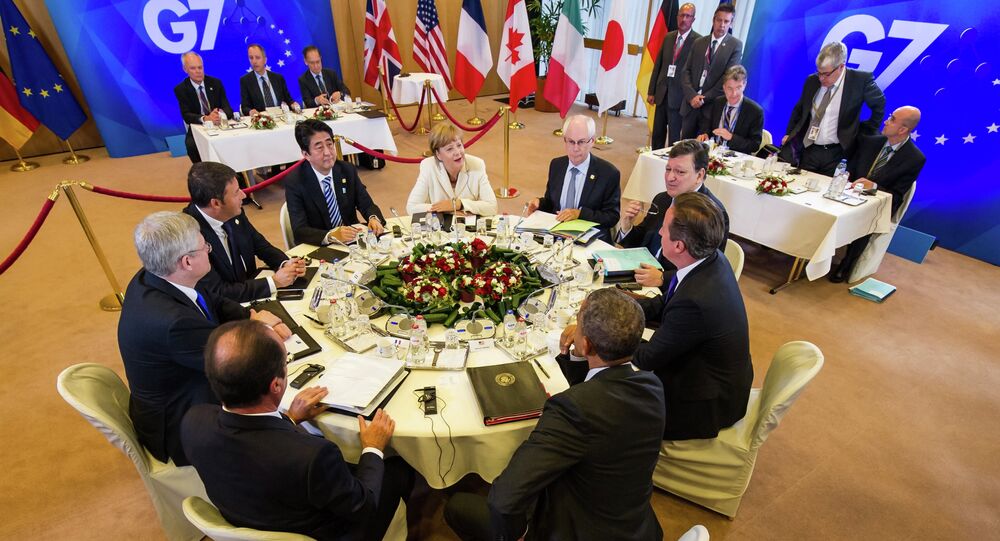 Canada seems to have small dog syndrome. Harper barks at Russia, promising not to allow it to re-join the G7 group; meanwhile Canada’s own place among the group of world’s largest economic powers remains to be answered.

Canada shouldn't be a member of the G7 group, said Alexei Pushkov, the head of the foreign affairs committee of the lower house of Russian parliament.

"Rather than speculate which country shouldn't be in the G7 group, Canadian Prime Minister better realize that Canada itself shouldn't be there: neither due to its GDP nor the influence in the world," Pushkov said on his Twitter account.

© AFP 2021 / ADAM BERRY
Merkel: Russian G7 Participation to Be Discussed at Group’s Upcoming Summit
Pushkov added that among members of the G7 group, the world's largest economies, including China, India, Russia and Brazil (first, third, sixth and seventh world's largest economies according to their GDP, respectively) are not represented. However, Canada (15th place) is in the G7 and was brought there through the back door, Pushkov said.

On Friday, Canadian Prime Minister Stephen Harper said he will "strongly oppose" Russia re-joining the G7 as long as Vladimir Putin is president.

"I don't think Russia under Vladimir Putin belongs in the G7. Period," Harper told AP in an interview.

Unlike Harper, other, more important members of the G7 understand that Russia's participation in the group is essential for international politics and the economy. German Chancellor Angela Merkel said Russia remains an important international player and the participants of the upcoming G7 summit will discuss how Russia could be included in the group in the future.

© Sputnik / Vladimir Pesnya
G7 Summit Without Russia: Problem for the West, But Not for the Kremlin
In March 2014, Russia's participation in the G7 was suspended due to Moscow's alleged involvement in the Ukrainian conflict.

The absence of the world's largest economies, including Russia and other members of the BRICS group, caused widespread criticism of the G7 and questioned its legitimacy. Due to its current format, the world's fastest growing economies and the majority of the world's population are not represented in the club, and thus they are denied participation in many global issues.