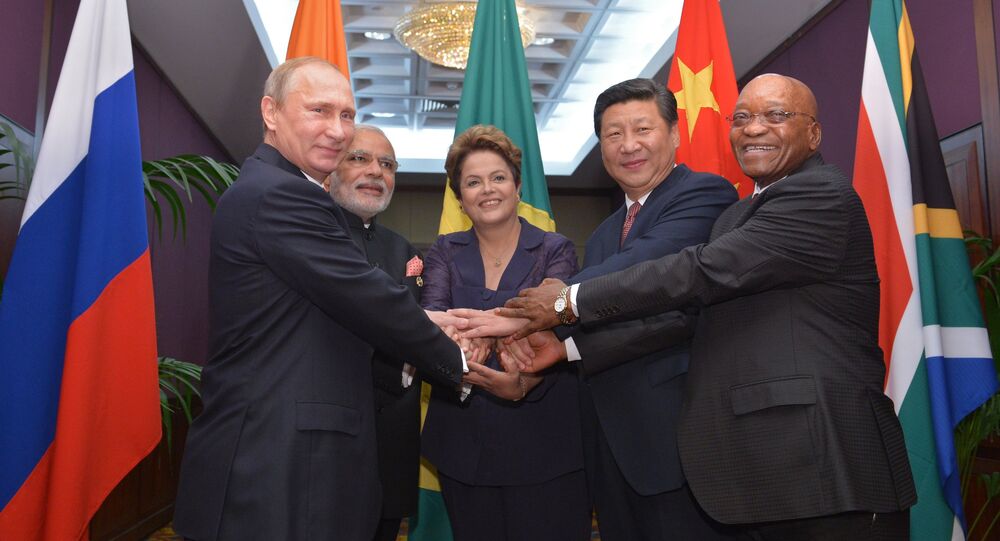 US to Lose Its Ground Under BRICS Pressure

Blind adherence to US policies and the introduction of anti-Russian sanctions have turned fatal for Europe; the axis of Russia-China-BRICS is set to overturn the global economic system and to prevail over the hegemony of the US, according to the chief economist of the German Bremer Landesbank.

The real damage to the EU countries caused by the launch of anti-Russian sanctions is much more comprehensive than that estimated by the statistics, Folker Hellmeyer, chief economist of the German Bremer Landesbank told in an interview with Deutsche Wirtschafts Nachrichten.

© Sputnik / Alexey Kudenko
US Seeks to 'Hold Russia Back' From Creation of Multipolar World
“The slump in German export volume by 18 percent in 2014 and by 34 percent for the first two months of 2015 is just the tip of the iceberg,” he said. “There are much more of the side-effects.”

“European countries, like Finland and Austria, who have strong developing businesses in Russia, place fewer orders within Germany. Moreover, the European corporations evade sanctions and create high-efficient production facilities in Russia. We, therefore, lose this potential capital stock, which is the basis of our prosperity, and Russia wins.”

The relationship of trust between Russia and Germany and the EU is somewhat broken. And it will take years to rebuild it. As the result, such companies as Siemens and Alstom have lost major projects in Russia, he said. The potential damage not only for Germany but for the whole of the EU, therefore, is much more comprehensive than what is being shown by current figures.

Meanwhile, Moscow, Beijing and other BRICS countries are looking forward to building the largest projects of the modern history: the construction of new Eurasian infrastructure from Moscow to Vladivostok, in South China and India.

Participation of the Western countries in these mega-projects looks quite uncertain, Hellmeyer said.

© Flickr / Mehr Demokratie
New WikiLeaks Docs Expose Secret TISA Trade Deal Plans
“For me, the conflict has already been set,” he said. “The axis Moscow-Beijing-BRIC has won. The West had enough. In 1990 th, these countries accounted for about 25% of world economic output. Now, they represent 56% of world economic output, and account for 85% of world population. They control about 70% of the world's foreign exchange reserves. They grow annually by an average of 4% — 5%. Since the United States has not been prepared to share the power worldwide, nor to build the emerging market sector on its own financial system, it lost.”

Neither problem in the world nowadays can be solved without Moscow or Beijing, said the economist.

The lack of its own agenda makes the EU and Germany look like a loser.

“The longer we pursue this policy in the EU, the higher is the price. The less one will take us seriously as an interlocutor,” he added.