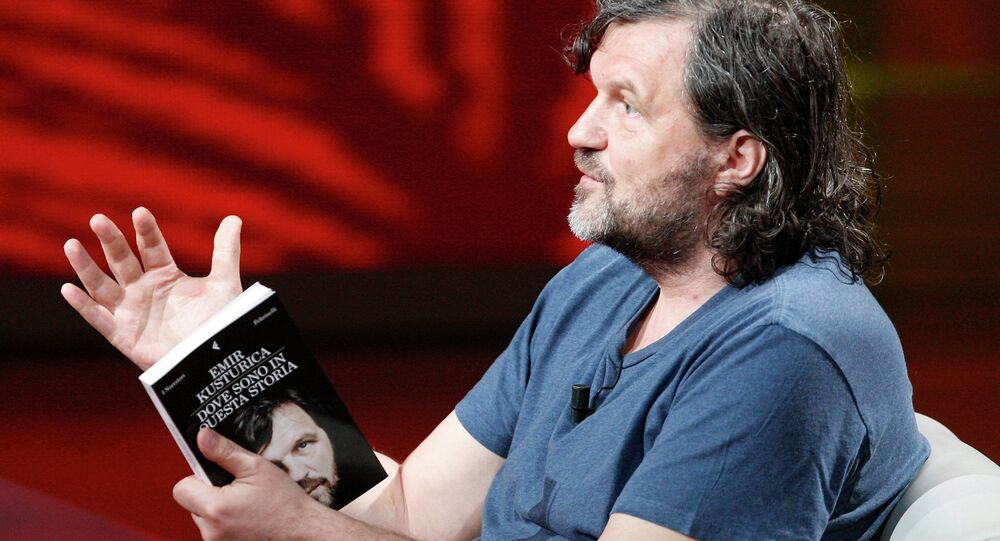 The award-winning film director believes that the next world conflict could start when the Pentagon decides to bomb the RT TV channel.

© Photo : facebook/ Paula Slier
RT Reporter Leaves Ukraine Amid Death Threats
World War Three will break out when the US finally tires of the RT TV channel, and decides to bomb it; in retaliation, Russia will destroy CNN, writes film director Emir Kusturica, in an article published on Thursday.

"Everything is different to how it was during the Cold War! Because of that it is useless to talk about a return to how things used to be, and listen to Henry Kissinger scare us. In the meantime, China has become the strongest world economy, Russia has recovered from Perestroika, India is growing into a genie! Military experts don’t argue that Americans have the most organized army, but there remains the unsolvable puzzle for NATO generals, who have called one of the Russian rockets 'SATAN.'"

© Flickr / Ayush
This is CNN: Network Deprives United Kingdom of its Name on Election Night
"The devil never comes alone! At the same time with this rocket and numerous innovations, the TV Channel RT has also appeared among the Russian arsenal."

"The program is broadcast in English, and watched by around 700 million people in 200 countries. The secret success of this television is the smashing of the Hollywood-CNN stereotype of the good and bad guys, where blacks, Hispanics, Russians, Serbs are the villains, and white Americans, wherever you look, are OK!"

"Congressman, and those in the State Department are continually upset by RT," writes Kusturica, adding that the US Secretary of State, who Kusturica calls "Jim Kerry," is "the loudest."

"Kerry and the congressmen are bothered by the fact that RT sends signals that the world is not determined by the fatalism of liberal capitalism, that the US is leading the world into chaos, that Monsanto is not producing healthy food, that Coca-Cola is ideal for cleaning automobile alloys and not for the human stomach, that in Serbia the percent of people who die from cancer has risen sharply due to the 1999 NATO bombings, that the social map of America is falling from day to day, that the fingerprints of the CIA are on the Ukrainian crisis, and that BlackWater fired at the Ukrainian police, and not Maidan activists."

In contrast, writes the film director, "CNN in direct transmissions assures that since the 1990s America has been leading humanitarian actions, and not wars, that from military planes fall angels and not bombs!"

"As time goes on RT will ever more demystify the American Dream and in primetime will reveal the truth hidden for decades from the eyes and heart of average Americans, in their own homes, in perfect English, better than they use on CNN."