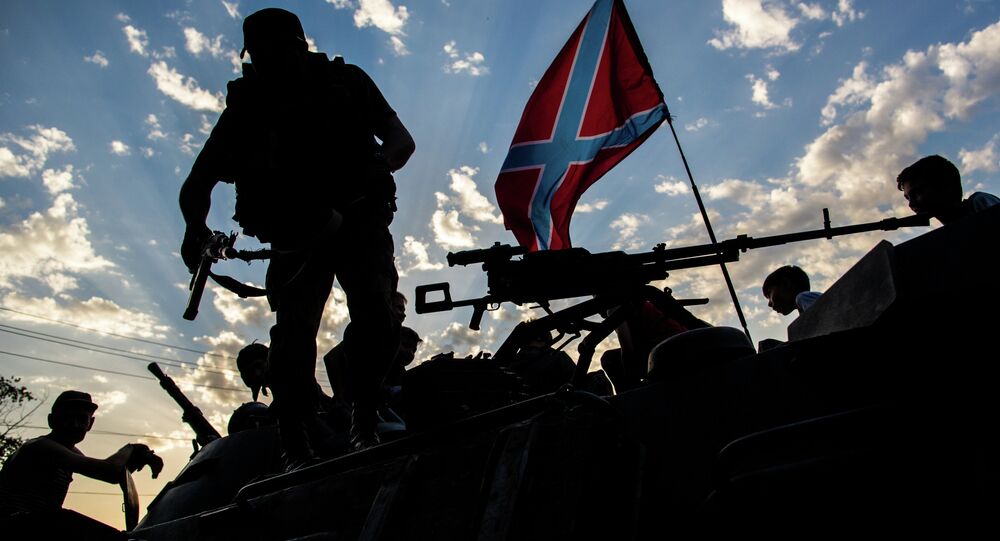 As Western journalists are quickly running out of ideas on how to finally prove “the presence of Russian troops” in Ukraine, they've started to flood social media with anti-Russian rhetoric, accusing Russian President Vladimir Putin of sending troops to eastern Ukraine.

© Sputnik / Sergey Chernyh
All Five Suspects in Murder of Politician Nemtsov Arrested in Moscow
It's really nothing new. But this time, several overly keen accounts clogged up Twitter, spreading #PutinAtWar and trying to hype up a document, allegedly written by the deceased Boris Nemtsov, a Russian opposition figure shot dead on February 27.

The explosion on Twitter coincided with the release of Nemtsov's report. The Atlantic Council, a US-based think tank in the field of international relations, will feature the report for the first time in English, under the title "Hiding in Plain Sight: Putin's War in Ukraine" on May 28 in Washington, DC. The Atlantic Council openly encouraged everyone to share the hashtag #PutinAtWar.

© Flickr / w0rd3r
#JesuisCharlie: Social Media and Online Propaganda
The Atlantic Council has close ties with the US State Department. The current board of directors is filled with former high-ranking US officials, including Henry Kissinger, Madeleine Albright, Robert Gates, Colin Powell, and Condoleezza Rice, among many others. The organization's current chairman Jon M. Huntsman, meanwhile, served as US Ambassador to Singapore and China. With such a diplomatic board of directors, it's hard to imagine that the think tank doesn't have some form of an agenda, especially when it comes to Russia.

And suddenly, a number of Twitter accounts (@DamonMacWilson, @ElliotHiggins and @Newcaster_EN just to name a few), began to flood social media with a non-stop barrage of tweets, promoting the report, allegedly written by Nemtsov.

Interestingly, the account @Newcaster_EN was virtually inactive, with its last tweet made on March 1, until it suddenly started spewing tweets again last night. Although the account @ElliotHiggins has been active, it hardly featured information about eastern Ukraine, choosing to focus on the UK general elections, Islamic State's activity in Syria and the abuse of human rights elsewhere in the Middle East.

So far, the hashtag #PutinAtWar has already been tweeted almost 1,500 times in less than 24 hours.

© Photo : hashtracking.com
Whoever is behind the creation of the hashtag #PutinAtWar definitely knows how to work the social media machine. The message was re-tweeted almost 1,500 times in less than a day.

In this day and age, when an information war between the West and Russia is far more likely than an actual military confrontation, it appears that the Atlantic Council, or whoever was behind the creation of the hashtag #PutinAtWar, definitely knows how to work the social media machine to carry out an anti-Russian agenda.