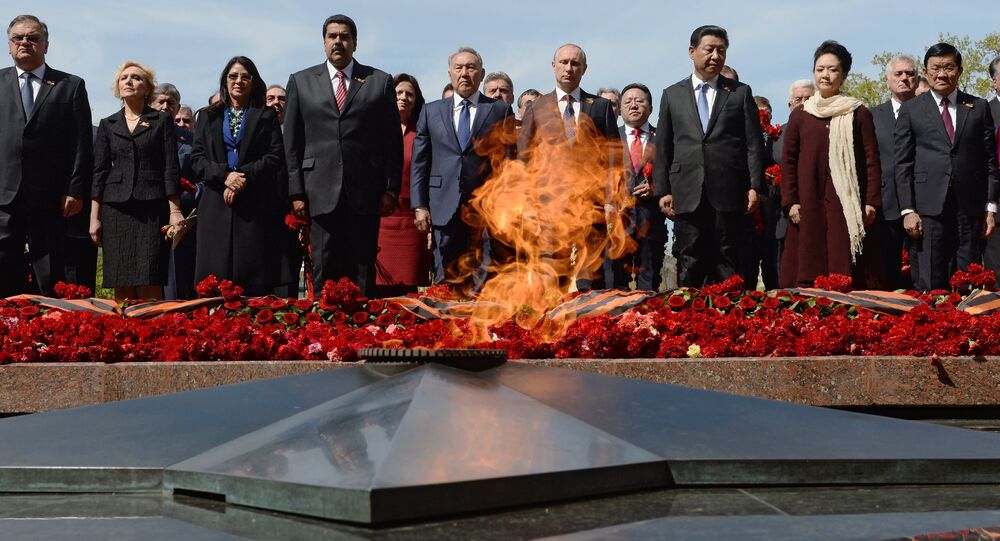 It is heartwarming that despite all the politics behind the attempts to disregard the glory and contribution of fallen Soviet soldiers who died fighting against Nazi Germany, there are people in the West who acknowledge the real history and salute Russian men and women for their heroism during World War II.

Many western leaders decided to boycott the Moscow Victory Day Parade on May 9 that commemorated the Soviet Union's victory over Nazi Germany 70 years ago. Due to the crisis in Ukraine, political tensions between Russia and the West have deteriorated over the last year, reaching their lowest point since the end of the Cold War.

Despite Western leaders' attempts to brush off historical facts and refuse to recognize the gigantic role of the Soviet Union in winning World War II, many Western readers have begun to call for an end to these lies and are paying proper tribute to the fallen Soviet soldiers, regardless of the current political tensions between Russia and the West.

There are people in the West who understand the vital role the Soviet Army played during World War II. They were frustrated, ashamed and angry that their leaders did not attend the Moscow Victory Day Parade.

"Especially for out Russian colleagues who just celebrated Victory Day yesterday, I think we can all acknowledge that the Russian PEOPLE made a tremendous sacrifice during WWII."

Frank Pecarich hailed the effectiveness of the Soviet Army:

"Perhaps a better way to compare the effectiveness of the western and eastern armies in WW II is not to compare Allied deaths but to compare German deaths. For military deaths only: Germans killed by Soviet Union 2,742,909, Germans killed by other Allies: 538,683. This comparison (which excludes casualties among Italian and other Axis forces, as well as Germans killed in the Balkans, Scandinavia, and Germany itselfsuggests that the Red Army was roughly 5.5 times as lethal as the other Allied forces combined."

Jay Bernhard, who reads the Wall Street Journal, could not hide his disappointment:

"This is simply about who won WWII against Germany… and the answer, by any account — except those of ignorant Americans — is the USSR caused most of the casualties the Germans suffered (over 80%). In most educated circles, 80% would constitute a clear majority but, you apparently hold the view that America which may have caused around 10% casualties actually won the war. You have just explained to me how American education has become a handicap for so many."

"Study history not by Hollywood movies and you will not wonder why. Only Nazis (ex- and neo-) don't mark this day together with Russians."

Eric Margolis, a well-known political journalist, strongly argued for the acknowledgement of the Soviet contribution to the victory over Nazi Germany, adding that the crisis in Ukraine must not lessen the glory, admiration and thanks owed to the Soviet people for their heroism during World War II.

Back in 1945, both Roosevelt and Churchill recognized the Soviet contribution and openly admitted its massive effort in defeating Nazi Germany. Today, however, the West has chosen to forget who really won the bloody war in Europe, said Margolis, adding that historical events and facts should not be manipulated.

© REUTERS / Sait Serkan Gurbuz
WWII Victory Day Deserves Top Status in US - Veteran
Russia's total losses from 1941-1945 were 26.6 to 27 million dead, said Dmitri Volkogonov, who was the leading Russian military historian. Compare these numbers to the total US death toll of 139,000.

When the Allies landed at Normandy in June of 1944, they fought German forces who were already shattered on the Eastern Front. By 1944, Germany was crippled by a devastating lack of fuel. Its planes could not fly, tanks and trucks could not be moved, and warships stayed in naval ports. Germany had no air support at Normandy because the Third Reich's once deadly Luftwaffe had been destroyed in the Soviet Union, its best pilots killed and fuel all used up.