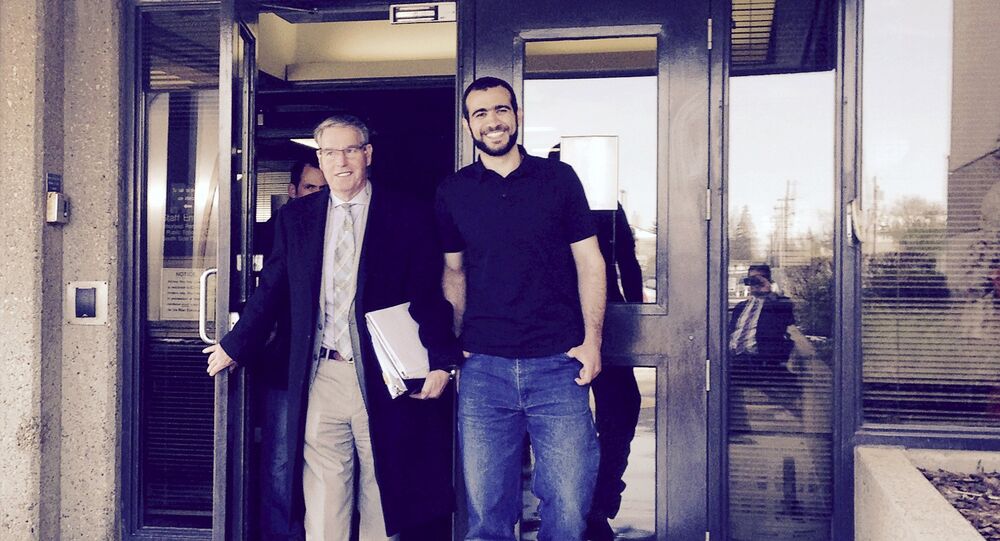 Omar Khadr, the youngest detainee ever sent to the Guantanamo Bay prison camp, and the first juvenile to be prosecuted for war crimes since World War II, was released on bail on Thursday in Canada as he appeals his murder conviction by a US military tribunal.

Toronto native Omar Khadr was held in custody since 2002, having been arrested when he was only 15 years old and accused of throwing a grenade in Afghanistan that killed an American soldier.

There is evidence that the child soldier was actually the victim of an internationally recognized war crime, as he was shot in his back by a US Special Forces soldier as he lay curled up in the fetal position and severely injured from a firefight.

He was subsequently imprisoned at Bagram Prison, then transferred to Guantanamo Bay, where supporters say interrogators forced a false confession and plea deal through eight years of torture.  He has since recanted his confession.

Leaked documents from the Department of Defense Criminal Investigation Task Force show that the field report on the incident had been doctored, and some believe it was to hide that the officer who Khadr is accused of killing actually died from friendly fire.

© AP Photo / Jacquelyn Martin
Obama: I Should Have Closed Gitmo ‘On the First Day’

Khadr was not transferred back to Canada until 2012, after being sentenced to eight years in prison in 2010 by an American military tribunal.  Dennis Edney, a lawyer for Khadr, maintains that he is innocent and that there is no evidence that the child soldier threw the grenade.  He says his client was faced with the choice of taking the plea bargain or spending the remainder of his life locked up in Gitmo, and was therefore forced to take the deal.

“We left a child, a Canadian child, in Guantanamo Bay to suffer to torture and not only did we leave a child to suffer torture, we Canada participated in this torture,” Edney stated while awaiting Khadr’s release.

Conditions imposed for the former child soldier’s bail include wearing an electronic monitoring device, living with his lawyer, observing a nightly curfew, and having only monitored contact with his family.

"We are disappointed with today's decision, and regret that a convicted terrorist has been allowed back into Canadian society without having served his full sentence," a spokesman for Public Safety Minister Steven Blaney said in a statement to the media.

There are currently 122 prisoners held at Guantanamo Bay, 57 of which have been cleared for release for years, many since 2009.