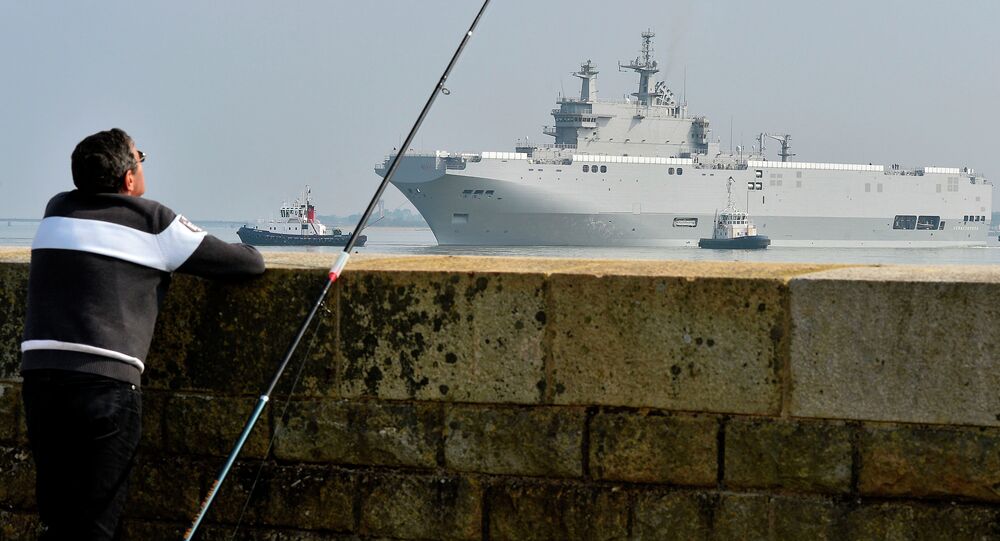 As France remains deadlocked in one of the most complicated military puzzles in its modern history, the shelved deliveries of its Mistral-class warships to Russia, French Le Figaro comes up with a list of options in case the country chooses not to deliver the helicopter carriers.

Send Them to The Bottom of the Ocean

As it turns out, sinking the French-made Mistral class warships is the cheapest option for the country, French daily newspaper Le Figaro wrote on Tuesday.

© AP Photo / Laetitia Notarianni
Caught in Limbo: French Navy Has No Use for Extra Mistrals, Looks to Moscow
The newspaper came to this conclusion after analyzing the best options available to France if the country’s officials choose to terminate the contract with Russia.

The choice to sink the vessels is the cheapest, but it will come as a shock to the shipbuilders of the Saint-Nazaire dockyard, where the vessels have been made.

To utilize the vessels otherwise will be a lot more expensive.

Give Them to the French Navy

An option to hand over  the two warships to the French Navy is also unlikely. Earlier in April, the French daily l'Opinion wrote that the French marines don’t want two extra Mistrals at their disposal, as they already have three Mistral-class ships and have no need for another two.

Besides, Le Figaro notes, "Vladivostok" and "Sevastopol" [the names of the two Mistrals] have been made to fit Russian requirements and their “de-Russification” will require a further outlay of millions of euros.

Sell Them to Someone Else
The newspaper also examines the  option of finding new customers for the existing vessels, with Canada or Egypt being suggested as potential buyers.

© Sputnik / Grigoriy Sisoev
Price of Stalling: Upkeep of Mistral Warships Costs France €5Mln a Month
Earlier in April, President Francois Hollande suggested that France might cancel the contract with Russia and return the money for the Mistral class helicopter carriers, without uttering a word on what will happen to the vessels.

Meanwhile, the upkeep and maintenance cost for the two ships, sitting at a French port, will cost French taxpayers €5 million per month.

© AFP 2021 / JEAN-SEBASTIEN EVRARD
Mistral Money Can Be Refunded if Contract Cancelled - Hollande
Russia made an advance payment in February 2011 pursuant to the January 25, 2011 memorandum of understanding between the two parties.

The handover of the first ship, named the Vladivostok, was scheduled for November 2014. The second ship, the Sevastopol, was supposed to arrive in early 2015. However, both  deliveries have not taken place.

Paris put the delivery on hold, citing alleged interference by Moscow in the Ukrainian crisis. The Russian side has repeatedly denied any involvement in Ukraine’s internal conflict, warning that it could file a lawsuit against Paris if contractual obligations for the Mistral deal remain unfulfilled.