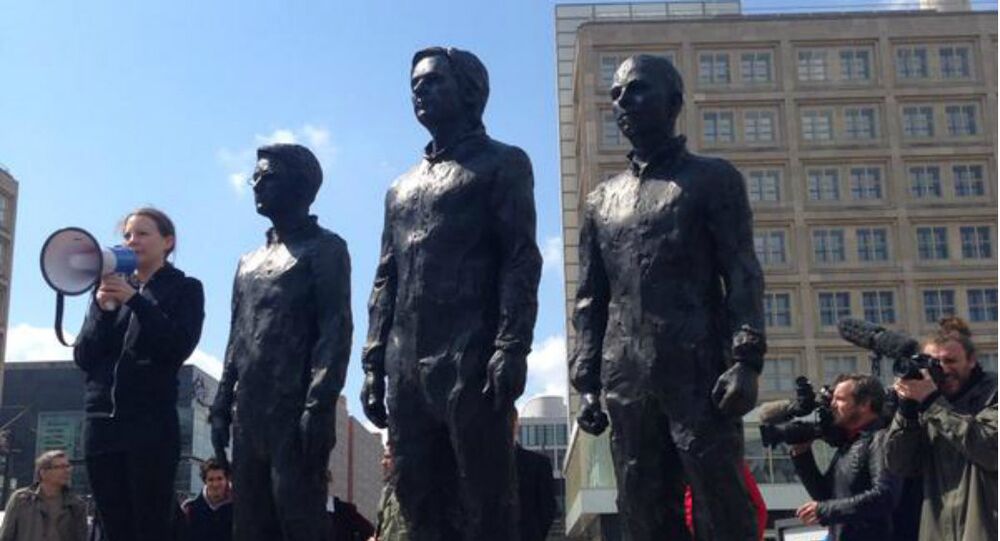 A statue depicting whistleblowers Edward Snowden, Julian Assange and Chelsea Manning was unveiled in Berlin on Friday, as a celebration of freedom of expression and the courage to expose truths.

Entitled "Anything to Say?", the artwork comprises three life size figures standing atop three chairs in Berlin's Alexanderplatz, while a fourth chair to one side remains empty, suggesting a platform for bystanders to stand up on to address the public.

"Public Art has the power to make people grow and change their point of view. The chair has a double meaning. It can be comfortable, but it can also be a pedestal to rise higher, to get a better view, to learn more," the Italian artist behind the work, Davide Dormino, says of the project.

But would-be whistleblowers won't have to be in Berlin to stand up and have their say: the intention of the project's organizers is to take the monument on a world tour.

Dormino and Charles Glass, an American journalist and author, came up with the idea as a counterpoint to monuments that celebrate the powerful. British journalist Vaughan Smith, who organized the crowdfunding campaign to complete the project, agreed with the sentiment.

"If you look at the statues we do have, they’re mostly of people who’ve done various things during our past in conflict and killed rather a lot of people," Smith told the Independent. "I think it’s refreshing to have a statue that’s perhaps owned by the public a little bit more."

The statue was also intended as an intentional counterpoint to the tradition of public war monuments, according to organizers.

"The Dormino statue pays homage to three who said no to war, to the lies that lead to war and to the intrusion into private life that helps to perpetuate war," says the website for the project.

Treatment of Manning "Jaw-dropping," "Not OK"

Some on social media have accused Julian Assange of self-promotion after WikiLeaks retweeted a link to the fundraising campaign. WikiLeaks has emphasized, however, that it had nothing to do with planning or executing the project.

Meanwhile, others attack what they perceive as a slight to Chelsea Manning by portraying her as male.

After her 2013 conviction, Manning, previously known as Bradley, revealed that she was transgender and wished to be identified as female.

Overwhelmingly, media outlets respected this decision and quickly switched to female pronouns and her chosen name. Though in some places Dormino respects this identification, in some promotional materials, he has identified her as male.

The artist addresses this issue on the project's Kickstarter page, saying he decided to portray Manning as she was at the time of the leaks which led to her arrest and imprisonment. The decision was "also motivated by the fact that the artist could not get enough portraits of her actual look to make a realistic portrait."

As for funding, the project was crowdfunded, though the Kickstarter campaign aimed to raise £100,000, as of Jan. 1 when it closed had raised £31,940. Smith had previously said that the majority of the funds would be dedicated to transporting the statues between it's various locations.

Currently, former NSA contractor Edward Snowden, who leaked evidence of massive government surveillance programs, is living in exile in Russia to avoid prosecution under the Espionage Act. Chelsea Manning is serving a 35-year sentence for leaking the largest trove of classified documents in US history.

Meanwhile, Wikileaks founder Julian Assange has lived confined to the Ecuadorian embassy building for over three years to avoid extradition by British authorities to Sweden over sexual assault allegations, because he fears further extradition to the United States.