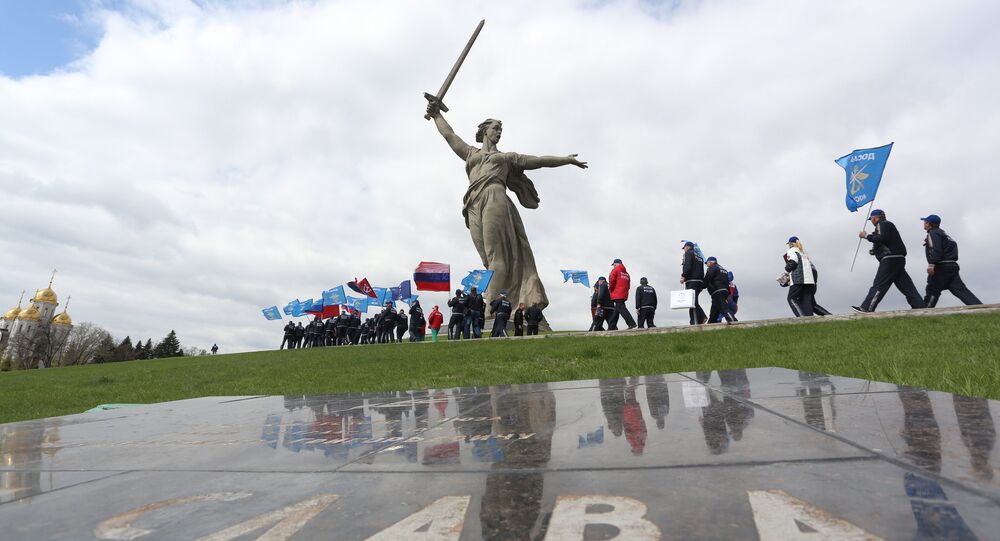 US news website has apologized for including Russia's WWII monument in an offensive list of the "most absurd Soviet-era buildings that are still standing."

WASHINGTON (Sputnik) — In a comment to Sputnik Business Insider apologized for including Russia's WWII monument The Motherland Calls in a list of the "most absurd Soviet-era buildings that are still standing."

The article, listing what the editors of the website considered to be the 12 most "horrific-looking" structures, was published on Wednesday.

© AFP 2021 / ALEXANDER KLEIN
Vandals Douse Black Paint on Soviet War Memorial in Vienna
Business Insider UK founding editor Jim Edwards remarked to Sputnik on Thursday that the slide depicting The Motherland Calls "was changed after we included it by mistake." It has since been deleted from their list after being featured for what they describe as "a brief period."

"We are grateful to the readers who brought it to our attention quickly," Edwards offered to Sputnik.

The article was edited after receiving many angry comments from readers for ridiculing a statue that memorialized a particularly bloody page in the history of the Soviet Union's fight against Nazism.

The Motherland monument is located in Mamayev Kurgan in Russia's Volgograd, formerly known as Stalingrad and is 87 meters tall – “nearly twice the size of the comparatively puny Statue of Liberty (46 meters)," as the media outlet put it.

The Battle of Stalingrad is considered one of major battles of the Second World War against Nazi Germany and the bloodiest battle in the history of warfare. This decisive battle became the turning point in the war and dealt a lethal blow to Nazi Germany that could not regain its initiative in the European theatre since then.

The Battle of Stalingrad claimed the lives of more than a million of Soviet soldiers and resulted in the death of about 1.5 million German Nazi servicemen.

Journalists and social network users expressed their outrage with the magazine’s decision to include the statue in the list of the most "horrific-looking" monuments in light of the forthcoming 70th Anniversary of Victory in the Second World War.
The list was made on the eve of the Victory Day, which is celebrated on May 9. In February 2014, US broadcaster CNN apologized for including a World War II monument in Belarus on its list of the world's ugliest monuments.

Poroshenko Gets Booed During Wreath-Laying at ‘Heavenly Hundred’ Memorial