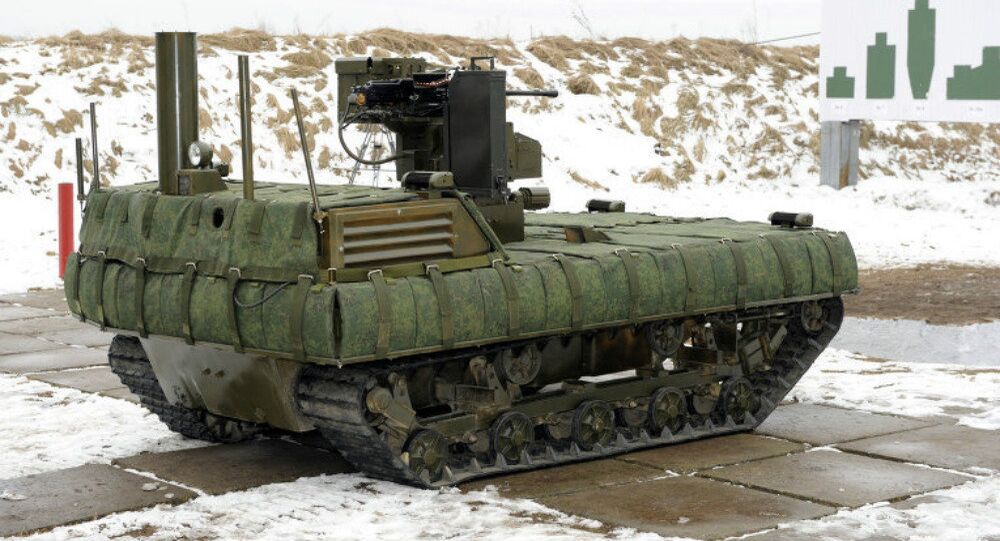 The Geneva meeting of experts on LAWS is currently underway with more than 40 analysts and campaigners from a dozen of countries seeking to work out the technical and legal aspects of fully autonomous weapons.

"They [fully autonomous weapons] would be a human rights abuse categorically in the same sort of way as nuclear or chemical weapons, they cannot possibly be used responsibly," Shahid Buttar said in a phone interview.

Buttar added that such kinds of weapons should not be found in "anyone's hands."

© AFP 2020 / CARL COURT
'Killer Robots' Unlikely to Pass Humanitarian Law Requirements - HRW
He also claimed that the governments of the United States, the United Kingdom and Israel are greatly influenced by military contractors which are opposed to banning fully autonomous weapons.

"The biggest reason for that [opposing the ban on fully autonomous weapons] are the private military contractors in those three countries," Buttar said.

Speaking of the situation in the United States, BORDC's executive director said that the country's government is "full of and run by weapons contractors, not the people" and that autonomous weapons would be "cash cows" for the manufacturers.

Shahid Buttar also warned that LAWS could be dangerous as they could fall into the hands of radical or extremist organizations, such as ISIL.

"A reason to oppose chemical weapons is not only because they are 'bad' or inhumane, but also because they could fall into the wrong hands. Same thing with nuclear weapons, same — with autonomous weapons," Buttar said, adding that extremist groups, such as ISIL, could get hold of them.

"If a drone that could be piloted remotely can be hacked, is there any reason an autonomous drone cannot be hacked?" Buttar concluded.

A Co-Founder of ICAN Switzerland and a participant of the Geneva conference Maya Brehm said that LAWS raise significant legal concerns under human rights laws.

"When machines identify and fire at targets based on pre-programmed target parameters, sensor input and probabilistic matching programs, human beings will no longer be able to apply the legal rules for the protection of the human person (under international humanitarian and human rights law), as we understand these rules today," Brehm told Sputnik Wednesday.

According to Brehm, there are also moral and security concerns related to the use of the killer robots. At some stage humans will no longer be able to exercise control over what is the target of the attack if the fully autonomous weapons are allowed to evolve, Brehm said.

Maya Brehm also noted that LAWS could be introduced by the US or European militaries.

"There appears to be a real danger that increasingly autonomous weapon systems will at some stage enter service with US and European military and law enforcement agencies," Brehm said.

Despite the fact that no country has openly spoken out in favour of the killer robots, some appear to be pursuing increases of autonomy in weapon systems, Brehm claimed.

Brehm also noted that "A legal prohibition on autonomous weapon systems is a distinct possibility".