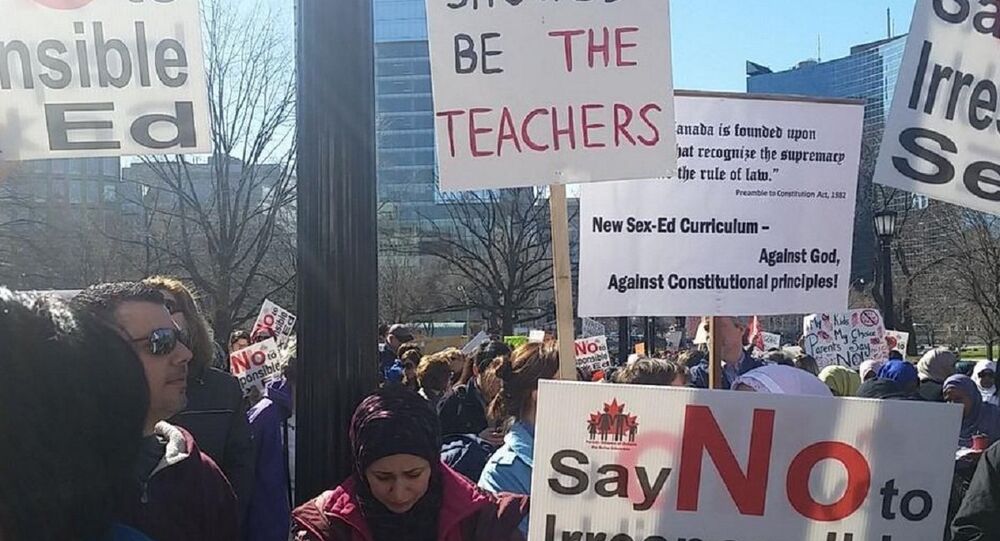 Thousands of angry parents protested against a new sex education curriculum proposed by the Liberal Government in Toronto.

© Photo : Twitter/@LadySnarksalot
Thousands Take to Streets in Canada to Protest New Anti-Terror Bill
The proposed changes to the sex education curriculum include educating grade threes about same-sex relations, while children in Grade 4 are to learn about online bullying and grade sevens — about the dangers of sexting. In addition, lessons about puberty are to be moved from Grade 5 to Grade 4.

The demonstrators holding slogans "Science not sex" and "No radical sex ed curriculum" demand wider consultations on the matter, arguing that many topics to be covered at schools are age-inappropriate.

Sex education curricula in Canada vary from province to province. In Ontario the system was last revised in 1998, long before smartphones became ubiquitous, bringing new threats such as cyberbullying. In 2010, the provincial government tried to reform the way sex education is taught in schools – but shelved the program amid numerous protests by parents and religious leaders.