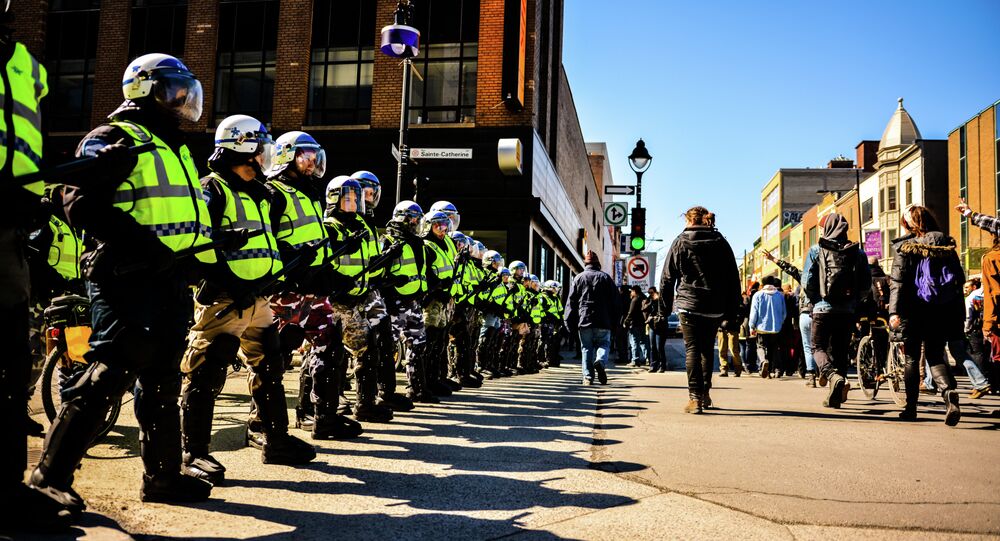 Hundreds of students marched on the streets of Montreal on Monday to protest the austerity measures proposed by the provincial government in Quebec.

Monday's protests will mark a continuation of the anti-austerity movement that boiled over last week when 250 demonstrators occupied a building of the University of Quebec at Montreal (UQAM) and clashed with police, prompting the University to cancel classes the next day. Tear gas and pepper spray were used against the demonstrators and 22 students were arrested.

The protests on Friday saw hundreds join the anti-austerity movement on the streets of Montreal.

Students, joined by community group and health and education activists, are demonstrating against cuts to public funding. The movement has been dubbed Printemps [Spring] 2015.

The demonstrators assembled on the street to stage die-ins and gathered around the Mount-Royal in Montreal.

Images and video on Twitter showed hundreds gathering to protest and students marching and chanting to drums.

Pictures were also shared of police gearing up and blocking streets in Montreal.

The movement has sparked intense debate in Quebec about student demonstrations with many questioning their right to protest. Following last week’s demonstrations, Quebec Education Minister François Blais has dubbed the movement undemocratic, saying that students do not have the right to demonstrate.

Bernard Tremblay, head of the Fédération des CÉGEPs, Quebec’s system of pre-university colleges and technical programs, said that one of the fundamental problems was that the rules pertaining to student protests varied by each school. CÉGEP has therefore called for the establishment of clear rules to avoid disruptive protests similar to the ones that occurred on Wednesday.

Montreal to Protest Against Police Brutality at St Patrick’s Day