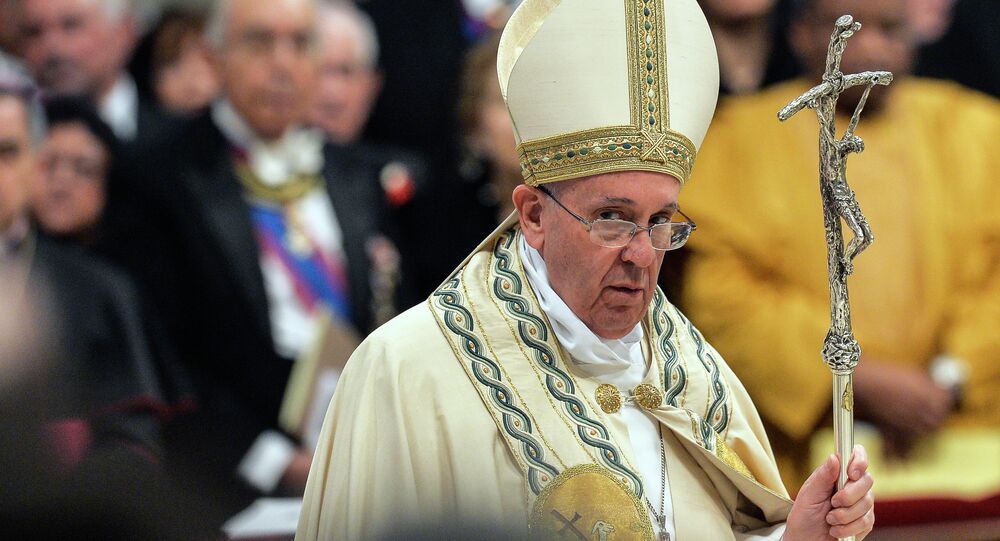 In a break from previous narratives, Pope Francis used the word “genocide” to refer to the mass murder of Armenians in 1915.

© REUTERS / Sandro Weltin/Council of Europe/Handout via Reuters
Conservative Polish Catholic Writer Slams Pope Francis for Being Soft on Russia
Pope Francis described the mass killings of Armenians under Ottoman rule in 1915 as "genocide"; a move most likely to draw ire from Turkey, media reports said.

Speaking at Sunday's Mass in the Armenian Catholic rite at Peter's Basilica, he said that "our human family has lived through three massive and unprecedented tragedies."

"The first, which is widely considered 'the first genocide of the 20th Century', struck your own Armenian people," the Pontiff added.

According to him, the other two genocides of the 20th century were "perpetrated by Nazism and Stalinism."

Historians say that up to 1.5 million Armenians were killed by Ottoman forces between 1915 and 1917.

Turkey summoned the Vatican ambassador over the Pope's "genocide" remark, AP reports. Prior to that, Turkey's embassy to the Holy See canceled a planned news conference for Sunday, presumably after learning that the pope would utter the word "genocide" over its objections.

Ankara is yet to make an official statement on Pope Francis' genocide comments.

© AP Photo / L'Osservatore Romano, ho
Haircuts for the Poor, Courtesy of Pope Francis
Armenia has repeatedly sought to win international recognition of the killings as the 20th century's first genocide.

Turkey vehemently rejects the claims, arguing that the number of deaths was much smaller.

Ankara said that many of those killed allegedly died in clashes during World War I and that ethnic Turks also suffered in the conflict.

Special Pizza Delivery for the Pope