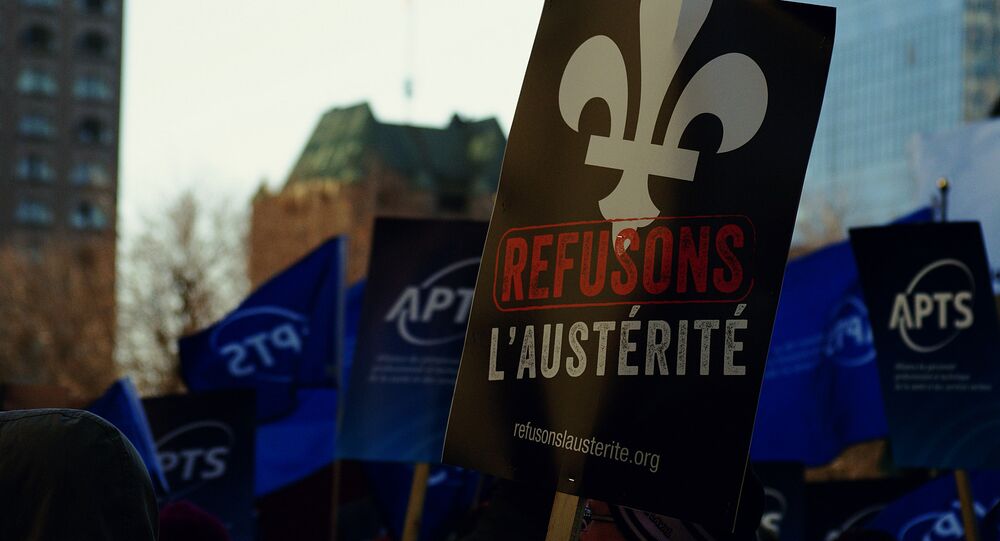 Anti-austerity demonstrations continued Thursday in Quebec, the day after the occupation of a university building by student protesters led to a late night police raid.

Broken glass and some clean-up operations meant that classes were cancelled Thursday in the University of Quebec at Montreal (UQAM) building which was occupied Wednesday night by around 250 protesters. The students had been registering their discontent over the arrest of 20 or so fellow anti-austerity protesters who had interrupted classes earlier in the day.

The University had won a 10-day court injunction, starting Wednesday, against blocking building access as part of protests. Students decided on the occupation, barricading themselves inside the J.A. DeSève building, after the administration asked the police to enforce the injunction.

Tear gas and pepper spray were used against protesters and by the time the building was cleared, one student was arrested for assault and five police cruisers were vandalized.

Elsewhere on campus Wednesday, classes continued, but there were some interruptions following a silent protest earlier in the day.

Masked students tried to interrupt classes but were eventually escorted out by security guards.

Austerity: "It Affects All Aspects of My Life"

The students are just one of the groups mobilizing recently in Quebec to protest austerity measures proposed by the provincial government which include cuts to health care, some pensions, day care services and yearly tuition hikes.

"I’m here to demonstrate against all aspects of austerity: the cuts, the hikes, the different fees, all happening in education, in childcare, in the health system," Julien Daigneault, a 31-year-old student at UQAM told the Montreal Gazette at a protest the previous week.

"I have a daughter, maybe my childcare fees will increase. I’m also a student, and there are major cuts in education to the number of professors, to the number of rooms available for different courses. It affects all aspects of my life.”

In 2012's "Maple Spring," massive student demonstrations against tuition hikes across the province gained widespread public sympathy and built successful opposition to the reigning Liberal Party government. They lost the subsequent election to the Parti Québécois and the tuition hikes were nixed.

This time around there has been some fracturing of that strong student movement. This round of protests is battling cuts on many fronts and also incorporating environmental protests, such as the Act on Climate march slated for Saturday in Quebec City.

The response of police to the anti-austerity protests made headlines for perceived heavy-handedness even before the this week's raid.

In late March, video emerged of 18-year-old student protester Naomie Trudeau-Tremblay being shot in the face with a tear gas canister at nearly point-blank range.

"I was gasping for air…I lost consciousness," Trudeau-Tremblay told CBC.

When police cleared the occupied DeSeve building on Wednesday, they smashed through windows and deployed tear gas and pepper spray.

One protester wrote on Instagram that "we watched the obscenely large amount of police, many in full riot gear surround the building and periphery. Given my involvement in #ggi 2012, arrests & police abuse I steered clear but there's no escaping the tear gas brigade."

The incident has drawn criticism of the university administration, with some calling for the resignation of Rector Robert Proulx.

"The rector is playing both the arsonist and the fireman. He’s pretending to deal with the conflict but in reality he is contributing to the escalation of the conflict," UQAM sociology professor Marcos Ancelovici told the Toronto Star.

There are also disagreements amongst the students themselves over tactics for demonstrations on campus, with some favoring a disruptive student strike and others insisting classes continue for those who want to study.

Others object to the destruction of campus property, like the Twitter commenter below who called it "disgusting."

Amid the conflict, some have been calling for the establishment of a right to strike for students, similar to that used by union members to vote on proposed strike actions. But Education Minister François Blais said told the Montreal Gazette no such mechanism was on the agenda.

“It’s been clear from the start … that we will never recognize the rights of certain people — even after a democratic process — to prevent other people from studying.”

Anti-Austerity Rally in Brussels Gathers Up to 20,000 Participants