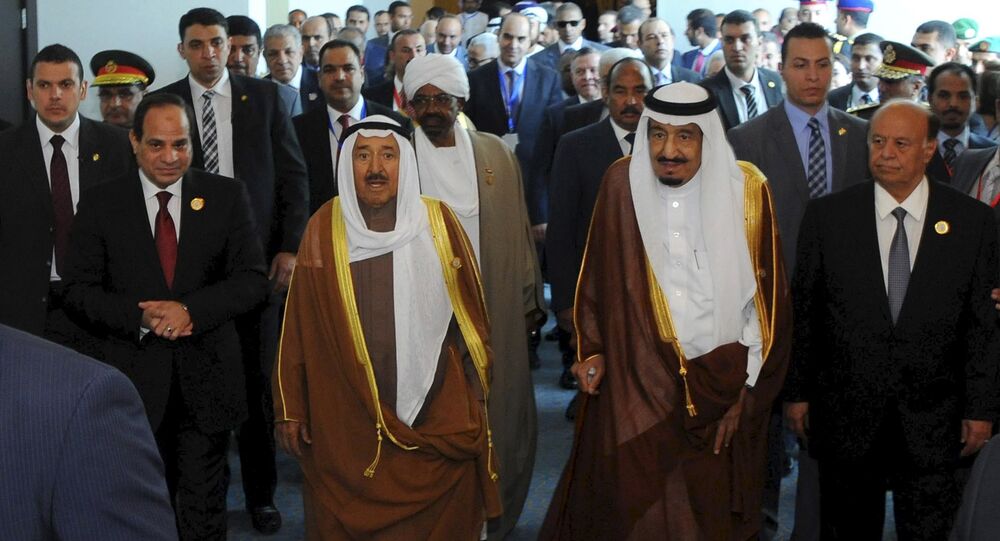 The leaders of the Arab League have announced the establishment of a unified military force during their summit, which is now under way in Egypt.

© AP Photo / Thomas Hartwell
Hadi Leaves Arab League Summit for Riyadh Amid Worsening Situation in Yemen
The formation of a unified regional force was announced by the leaders of the Arab League, who are currently holding their summit in the Egyptian resort city of Sharm el-Sheikh, according to a draft communique of the summit.

The communique said that the voluntary military force will be allowed to intervene in order to counter challenges that threaten the safety and security of any Arab League member; additionally, the interference should be specific requested by that state.

Iraq, which is one of the members of the Arab League, was quick to express its reservations regarding the proposed force. Tehran said that it rejects the idea of military intervention in any Arab country, and suggested that creating an open dialogue was the best solution.

On the Yemen crisis, the draft statement urged Houthis to "immediately withdraw from Sanaa, government institutions, and give their weapons to the legitimate authorities". The document voiced its support for the ongoing Saudi-led 'Operation Decisive Storm' in Yemen.

Saturday saw the Saudi-led coalition's third day of a bombing campaign against the Houthi militias who are now on their way to the southern Yemeni city of Aden after capturing the capital Sanaa last year. The developments have forced Yemen's President Abd-Rabbu Mansour Hadi to flee Sanaa.

Regarding Syria, the communique urged Arab League Secretary-General Nabil al-Arabi to continue talks with UN chief Ban Ki-moon   to map out an action plan that includes a political solution to the Syrian conflict.

Yemeni President Arrives in Egypt Ahead of Arab League Summit