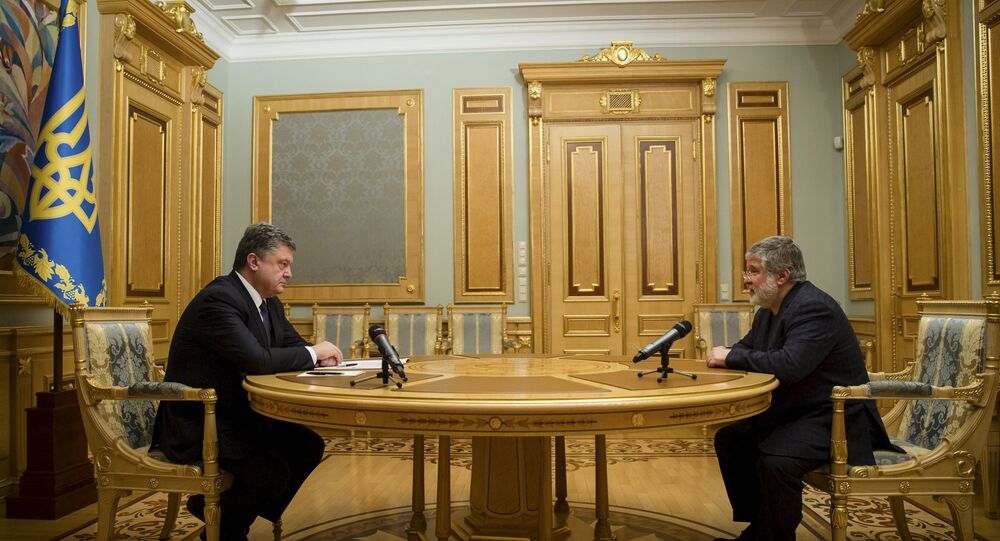 Poroshenko Still at Risk? US Could Hedge Bets on Its Choice of Oligarchs

While the majority of the internet media presume that the US had already made its choice of oligarchs in Ukraine and has opted to support the head of state, Petro Poroshenko, the German online newspaper Deutsche Wirtschafts Nachrichten believes that Washington might still change its mind and shift the balance of power in favor of Ihor Kolomoiskyi.

The newspaper says that it is still unclear whether the US is firmly behind President Poroshenko or if the Ukrainian head of state might be at risk, as Washington might gradually shift towards Kolomoiskyi and bet on him in its standoff with Russia.

The paper supposes that the US hardliners, including Assistant Secretary of State for Europe Victoria Nuland and Republican Senator John McCain, who are known for their harsh anti-Russia rhetoric, might choose Kolomoiskyi as a partner in their fight against Moscow.

Meanwhile, other media sources are confident that Washington has already made up its mind.

"The current stand-off between Ukrainian big business tycoon Ihor Kolomoiskyi, the [former] governor of the Dnipropetrovsk Region (one of the most important regions of the country) and President Petro Poroshenko was stopped only after the US embassy directly interfered to support the head of state. Poroshenko would not dare launch an open attack against Kolomoiskyi or, all the more, fire him without Washington’s say so,” says the Strategic Culture Foundation, an online journal.

#Ukraine #Kolomoisky lost this battle, but it’s too early to talk of his total defeat. ➡http://t.co/dgRiSMPiVZ pic.twitter.com/aVrZHLdfm2

“Sergey Leshchenko, a parliamentarian from the bloc of President Poroshenko who has studied in the United States as a grant-aided student, admitted that the new law, which allowed Naftogas, a state company (or the one that belongs to Poroshenko), to get control over Ukrneft to spite Kolomoisky, was adopted according to the instructions coming directly from Washington,” it adds.

“Kolomoisky ended up in an unenviable situation: the whole repression-punitive apparatus of the Kiev junta now stands against him. Meanwhile it is already publicly stated that Kolomoisky will not only lose a part of his property, but that he will also lose his punitive battalions,” blogger under nickname Colonel Cassad. writes.

“In general, all of this looks like a huge gamble with very bad cards, where Kolomoisky will be fully defeated with a high probability, or he will be forced to accept a humiliating peace with a number of concessions for Poroshenko et al. His security resources are much weaker than the resources available to Poroshenko,” he adds.

“But will Poroshenko be satisfied by such a draw?” he questions. “It will depend on the kind of instructions he received from the State Department and the CIA with respect to the reconfiguration of the Ukrainian political and oligarchical playing field. There is little doubt that Kolomoisky will lose — the question is only in the magnitude of his loss. “
Sergei Leshchenko, an MP from the Petro Poroshenko Bloc, has written in his blog that the Ukrainian leaders had got a call from the US with instructions to support the president.

Crabs in a barrel — http://t.co/CXt8J8siwJ #Ukraine Details on the feud between Poroshenko and Kolomoisky. These are @BarackObama's people

“Biden [US Vice President] called Yatsenyuk and his political party and asked to demonstrate the unity with the President Poroshenko in restraining Kolomoiskiy,” he wrote.

The blogger also suggested that Kolomoiskyi was dismissed following his insult of a Radio Svoboda (Radio Free Europe/Radio Liberty) journalist. He used obscene language talking to the reporter. And Radio Svoboda, he said, exists thanks to taxes paid by American citizens. A portion of this money goes to Ukraine. Leshchenko was sure that the US government would not like it

Other Ukrainian media sources echo the above, saying that the US ambassador has also made it clear.

“Geoffrey Pyatt, the US ambassador in Kiev, met with Kolomoisky during the stand-off and said in a radio interview afterward that the Dnipropetrovsk governor realized 'the law of the jungle' no longer applied, and that state companies needed to be run as the law required,” Bloomberg says in its analysis of the situation on the ground.

Geoffrey Pyatt however denied that he played any role in dismissing Kolomoiskyi and called it a 'misinterpretation of facts" on his Twitter.

Bloomberg, however, adds that “nothing in Ukraine is clear-cut, though”.

"I don't rule out a stake on early elections, depending on what target is chosen — the parliament or the president," Bloomberg quotes Mustafa Nayyem, a legislator with Poroshenko's electoral bloc, as writing on Facebook.

Meanwhile, the agency says, Ukraine remains a strife-ridden no-man's land in the middle of Europe, struggling to define itself in terms others will understand, and getting bogged down in complex problems of its own design.

Biggest Threat to Poroshenko His Inner Circle: Kolomoiskyi on His Dismissal