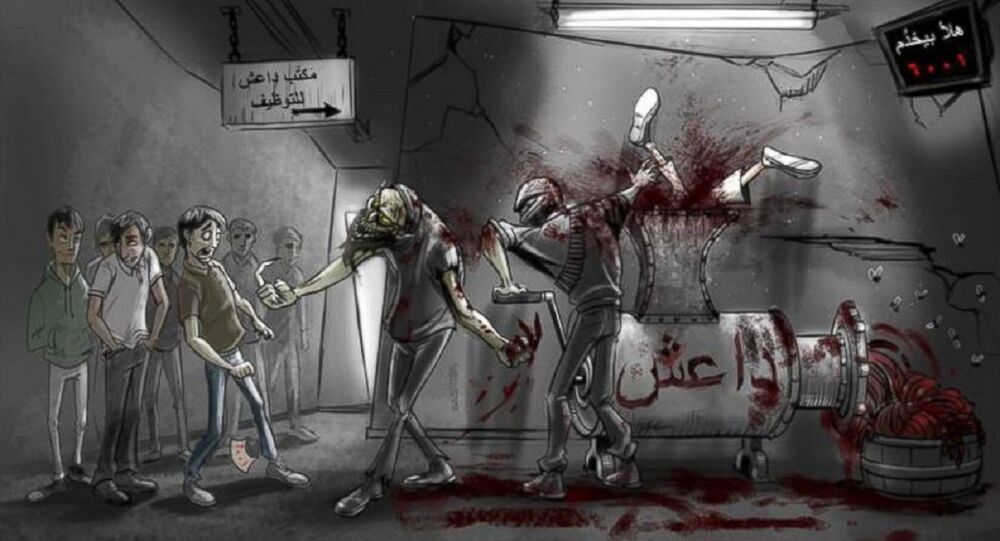 Propaganda WWII-Style: US Drops Thousands of Anti-ISIL Leaflets Over Syria

At least 60,000 copies of anti-Islamic State leaflets have reportedly been dropped by a US Air Force plane near the northern Syrian city of Raqqah, which is controlled by the Islamist group.

© Sputnik / Sergey Guneev
Ground Intervention Needed to Defeat ISIL - Erdogan
A US Air Force aircraft has dropped at least 60,000 copies of graphic leaflets over the northern Syrian city of Raqqah, the Islamic State's self-proclaimed capital; the leaflets depict recruits to the jihadist group being fed into a meat grinder, sources said.

The leaflets, which are part of an information campaign to prevent people from joining the Islamic State, were dropped in a canister by an F-15 fighter jet last week.

"The message of this leaflet is: if you allow yourself to be recruited by Daesh, you will find yourself in a meat grinder. And it's not beneficial to your health," Pentagon spokesman Steve Warren said. Daesh is the Arabic acronym for the Islamic State group.

The leaflet shows a room with seven young men standing in a line under a sign that reads says Daesh Recruiting Office; a giant meat grinder labelled as Daesh and a sign in the corner says "Now serving 6001."

© REUTERS / Senior Airman Matthew Bruch
US Starts Bombing ISIL-Held Tikrit After Iraqi Assault Stalls
The wide-scale expansion of the Islamic State, which has seized large areas in Iraq and Syria, has become one of the international community's main headaches. According to the CIA, the Islamic State includes 30,000 militants, who declared a caliphate in the occupied territories and are now seeking to further expand its territory.

There is no united front against the Islamic State, which is contained by the government forces of Syria and Iraq, a US-led international coalition, as well as Iraqi and Syrian Kurds.

At least several thousand civilians have been killed in the violence, which also left hundreds of thousands more displaced.

The Islamic State's ranks in Syria and Iraq have repeatedly been replenished with citizens from more than 80 countries.

US Pounds ISIL Forces in Tikrit