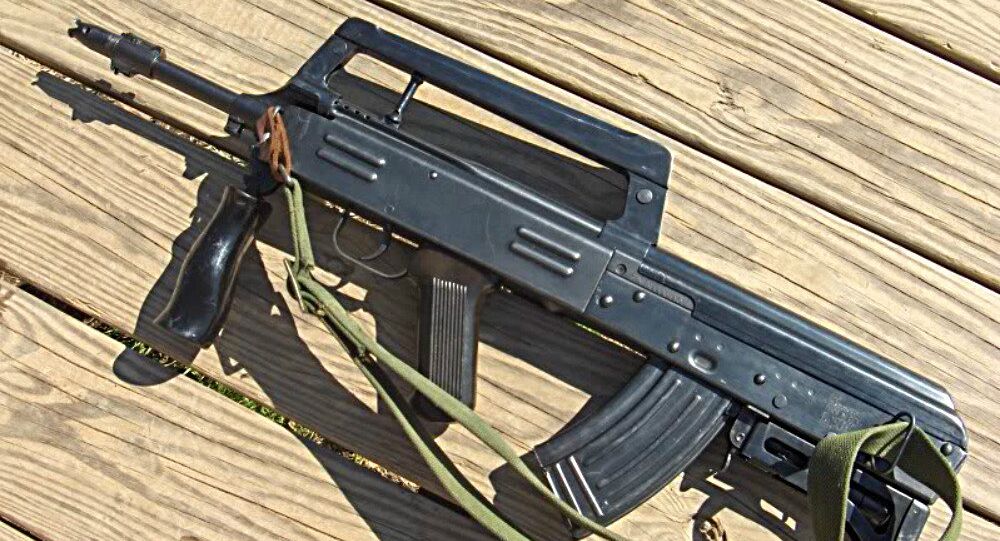 Although the Type 56, a Chinese licensed copy of the AK, became one of the most successful variants of the rifle made abroad, the bullpup version failed to impress large clients and was only sold in limited quantities for private customers.

The rifle is a sort of Frankenstein, using components from the AK when it comes to the operating mechanism, the French FAMAS when it comes to the carrying handle and the Austrian Steyr AUG for the front handle. The Chinese desire for a military bullpup was finally fulfilled in 1995, with the QBZ-95 which entered service in 1997 and managed to replace another AK variant, the Type 81 in many units.

Known as the AIMS-74 abroad, the Md.86 is very unusual in that it is an independent development on the AKM which uses the 5.45mm caliber introduced in the Eastern Bloc with the AK-74. As a result, the rifle weighs almost two pounds more than the analogous AKS-74.

In addition to the outdated firing mechanism, the md. 86 has a wooden handguard, which it inherited from the md.65 discussed below, despite there being no necessity for it.

The Polish variant of the AK-74 was intended to be a lighter and more modern version of the rifle. Unfortunately, its more complicated firing mechanism, which alongside semi-auto and full-auto modes allowed for three-round bursts, led to a decreased reliability, which in turn led to frequent jamming and misfires. Arms expert Igor Zenchuk told Russian television channel Zvezda:

"As a result, between 1990 and 1994, they made around 25,000 of these odd jobs, after which the program was fortunately closed down. As far as we know, most of these rifles are traveling around the Middle East and the Poles themselves switched to NATO countries' weapons."

This rifle is actually a copy of the Yugoslav AKM variant known as the Zastava M70. Probably the most unusual thing about it is the existence of a semi-automatic sniper rifle variant which was designed as a response to the need for a short-range sniper rifle during the Iran-Iraq war in the 1980s.

By itself, putting a short-range scope on an AK is not a bad idea, and urban warfare and survival guides available in the former USSR suggest it as a way of providing mid-range suppressive fire. However, reducing the rifle to semi-auto mode only gives no real benefits in combat.

The assault rifle version of the Tabuk also gave rise to the well-known story of how during the Gulf War, US Army soldiers dropped their M16s and picked up Iraqi soldiers' AKs. In reality, many of the rifles "picked up" by US soldiers were the Tabuk. In fact, even today there is a small arms manufacturer in the US which builds copies of both assault and sniper variants of the Tabuk, complete with original engravings and an Arabic-language manual.

The rifle's highly unusual shape has no real explanation other than a desire to innovate. According to arms expert Igor Zenchuk:

"If the standard, although the old Soviet- or Russian-produced AK can be used without any problems, the 'Romanians' have to be accustomed to. First of all, since 1965, the Romanians liked to experiment: they made muzzles of unusual shapes, made the barrel itself shorter, put various useless handles on. I don't think there's anything left of the good old AK in its Romanian versions."

The rifles, which were generously exported around the world even managed to see action in the 2008 South Ossetia conflict, in which Georgian troops actually preferred the rifle to the XM-15, an M4-type carbine produced by Bushmaster and generally used by private military contractors.