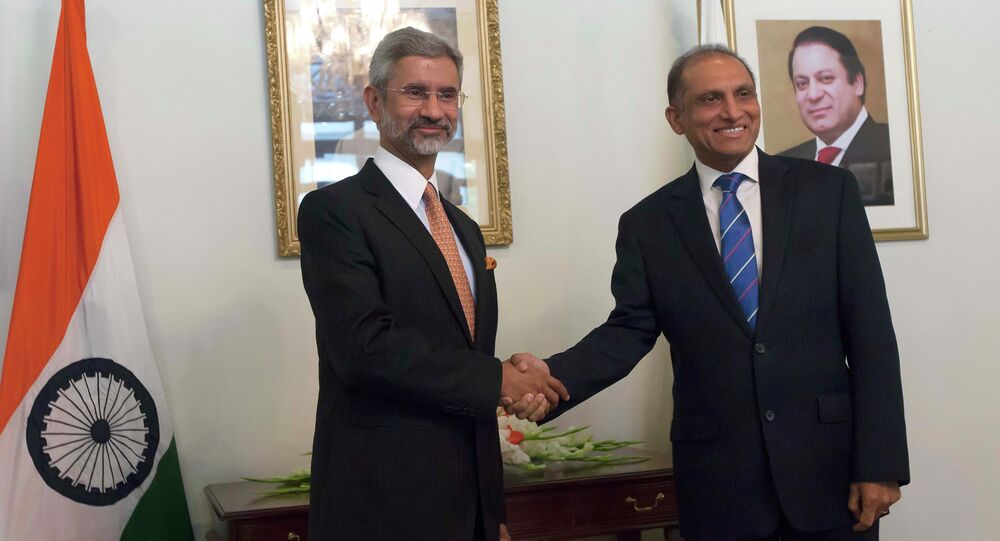 The agreement was made during the first meeting of the two countries' foreign ministers since India and Pakistan suspended talks last year over the disputed Kashmir region.

© AP Photo / Saurabh Das
US Tries to Bully India Into Defense Cooperation Agreement
NEW DELHI (Sputnik) – The Foreign Secretary of India Subrahmanyam Jaishankar and his Pakistani counterpart Aizaz Ahmad Chaudhry agreed to ensure peace along the border during the meeting in Pakistan's capital Islamabad on Tuesday.

The meeting was the first one at foreign policy chief level since the countries suspended talks last year over the disputed Kashmir region.

"We agreed that ensuring peace and tranquility on the border was vital," India's top diplomat told reporters.

During the meeting, India raised the issue of cross-border terrorism, including a series of terrorist attacks in Indian city of Mumbai in 2008. Twelve coordinated attacks claimed the lives of 174 people, including ten attackers, and injured over 300. The attacks were organized by the Lashkar-e-Taiba Islamist group, based in the part of Kashmir administered by Pakistan.

© AFP 2021 / Noorullah Shirzada
Desert Guns Never Tire: No Peace for Pakistan
"My visit provided an opportunity to discuss our bilateral relations. We engaged on each other's concerns and interests in an open manner. We agreed to work together to find common ground and narrow differences," Secretary Jaishankar added.

Indian-Pakistani relations have been complicated since the end of British rule in 1947. The British India division created an ongoing territorial dispute over the northern Indian state of Jammu and Kashmir between the two countries.

India and Pakistan have clashed in four wars and a number of military conflicts. In 2003, the two nations agreed to a ceasefire following another border conflict. However, both countries have repeatedly accused each other of violating the truce.