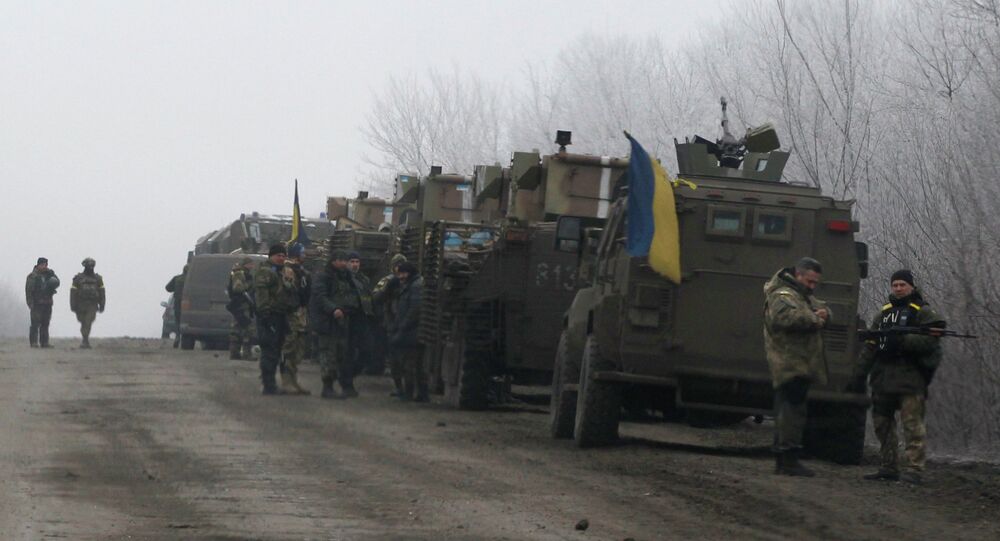 The statement made earlier by the leader of Ukraine's Right Sector Dmytro Yarosh regarding the advance of his two battalions in Debaltseve area has disappeared from the Ukrainian Guard's website on Sunday.

© Sputnik / Pavel Palamarchuk
Right Sector to Continue Military Operation Regardless of Minsk Deal
KIEV (Sputnik) —The statement by the leader of Ukraine's Right Sector movement Dmytro Yarosh regarding the advance of his two battalions in Debaltseve area has disappeared from the organization's website on Sunday.

The ceasefire between Kiev forces and Donbas independence supporters entered in force at midnight, local time on February 15 (February 14, 22:00 GMT), as was agreed at the February 12 meeting between the leaders of Ukraine, France and Germany and Russia in Minsk.

The statement saying that two armed battalions are continuing their advance in Debaltseve area and have achieved serious gains was published on National Guard's website early on Sunday.

Since the beginning of the ceasefire regime, both Kiev forces and Donbas independence supporters accused each other of violating the truce.

Eduard Basurin from Donbas militia said Kiev forces have started shelling the positions of LPR and DPR in Debaltseve and forced the units of the DPR to open selective return fire.

Earlier Yarosh stated that the Right Sector movement does not recognize the new Minsk agreements and reserves right "to continue active military actions in accordance with its own operational plans."

During the recent weeks, Debaltseve, one of Ukraine's biggest railroad junctions, has remained one of the sites of most intense fighting between Kiev forces and independence supporters of Donbas.